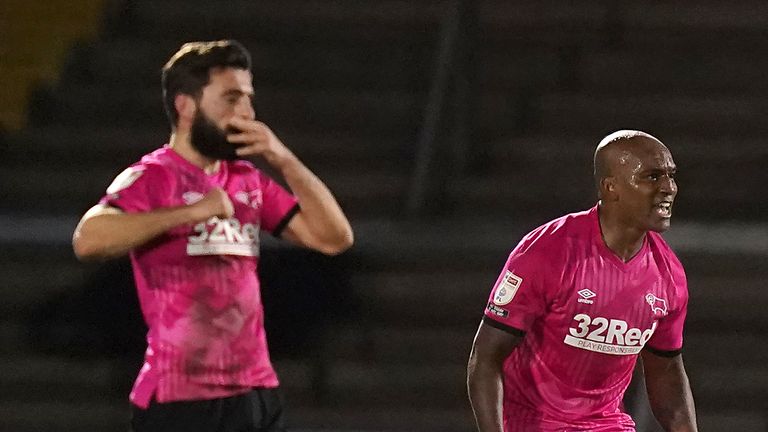 Andre Wisdom struck in the fourth minute of stoppage time as Derby pulled further clear of the Championship relegation zone with a 2-1 victory at bottom-side Wycombe.

The Rams are now six points above the bottom three following a fifth win in seven matches for Wayne Rooney’s side, who survived a few scares at Adams Park along the way.

Uche Ikpeazu had earlier scored for both teams, converting a penalty to cancel out his first-half own goal, and the Chairboys can consider themselves unlucky to have come away with nothing for their efforts.

Daryl Horgan had the ball in the net for Wycombe after 14 minutes when he finished calmly into the bottom corner after being played in by David Wheeler’s quickly-taken free-kick, but the offside flag had long since been raised – though replays suggested he was onside.

The Chairboys fell behind in unfortunate circumstances just a couple of minutes later as Martyn Waghorn’s corner was headed firmly into his own net by Ikpeazu, showing the perils of forwards defending in their own box.

Horgan then bent a terrific effort wide from just outside the area, with David Marshall seemingly beaten.

But the Derby goalkeeper and captain then preserved his side’s lead just before half-time with a terrific tip-over from Ikpeazu’s header, following another good cross by Horgan.

But Wycombe had the chance to claim the equaliser they deserved as they were awarded a penalty three minutes into the second half when Josh Knight was bundled over in the box by namesake Jason Knight.

And it was redemption for Ikpeazu, who smacked his spot-kick down the middle to level the scores.

The Chairboys kept pressing, with Jordan Obita bending a free-kick just over and Marshall just about clawing a daisy-cutter from Anis Mehmeti around the post.

In what was a frantic resumption, the Rams came close to regaining their lead when Craig Forsyth headed just wide from Waghorn’s free-kick.

Having stuttered for the better part of an hour, Derby began to grow as a threat and Wycombe goalkeeper Ryan Allsop had to produce a smart save to keep out Jason Knight’s low effort.

Allsop was soon called upon again as he stood his ground to deny Lee Gregory following some neat build-up involving Waghorn and Kamil Jozwiak.

Ikpeazu then came close to a spectacular second as his swerving long-range strike had to be tipped over by Marshall.

But just as an entertaining clash looked to be ending all square, the visitors snatched all three points as the death as Wisdom pounced on the rebound after Waghorn’s free-kick came back off the post.

Wycombe’s Gareth Ainsworth: “I couldn’t ask for any more today from my players. I could have asked for more from a couple of other people, which I won’t get myself in trouble for, but I thought we were outstanding tonight. We were really, really good and I will focus now on the positives, not the negatives, because there are too many to mention.

“The officials tonight I didn’t think were good enough at all – and I could go into some major detail because it was terrible. I can’t fathom out why things are going so against us. I think we’d be well in this (relegation) fight and not bottom of the league, which is crazy to say, but it really does pain me to say that we deserved a lot more. If they actually look into some of the decisions that have gone against us I’ll be astounded, but I’m so proud of the boys.”

“I believe a lot in these players, I believe they’re a good team and we’ve got more quality than maybe they think, so they have to believe in themselves now and they need to believe they can play better football than they did tonight. We knew it was going to be a battle – we needed to adapt and hang in there at times, which we did, but I just felt we could make the game a bit easier for ourselves.”