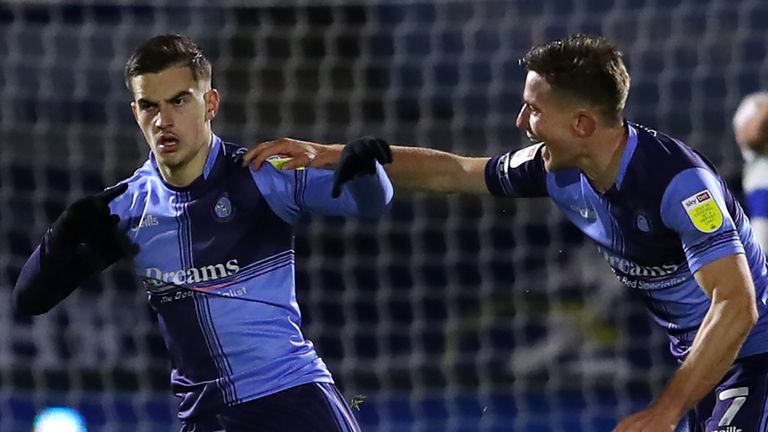 
Wycombe fell to the bottom of the Sky Bet Championship despite Anis Mehmeti’s first senior goal snatching a 1-1 draw at home to QPR.

The visitors had gone ahead thanks to Jason McCarthy’s second own goal of the season but substitute Mehmeti’s strike from the edge of the box two minutes from time secured a share of the spoils for Gareth Ainsworth’s side.

The hosts had been preparing to welcome 2,000 fans to Adams Park but Buckinghamshire being placed into Tier 3 this week saw the match played behind closed doors once more.

Both teams were looking for a winning start to their festive fixtures and the two goalkeepers were in action early.

QPR’s Seny Dieng got down well to save Scott Kashket’s second-minute effort and, at the other end, Ryan Allsop clawed away Rob Dickie’s header before pushing the same player’s long-range effort out for a corner.

Rangers looked the more threatening as the half progressed and they broke the deadlock on the half-hour mark.

Ilias Chair’s cross from the right looked to be covered by Jason McCarthy but his skewed clearance flew towards goal and went in off the hand of Allsop.

Wycombe had chances either side of the break, with Adebayo Akinfenwa heading over and Dieng on hand to parry David Wheeler’s long-range header out for a corner.

The hosts were furious after seeing penalty appeals waved away five minutes into the second half, with Joe Jacobson booked for dissent, and this spurred Wycombe into a flurry of chances through Daryl Horgan.

First, his shot was saved by Dieng, with Kashket’s header from the rebound narrowly over the bar, then Horgan beat the offside trap but saw his effort diverted into the side-netting by Dieng.

QPR had second-half chances of their own, with Yoann Barbet’s header from a Chair free-kick pushed behind for a corner and Niko Hamalainen and Todd Kane missing with opportunities from distance.

Wycombe brought on a series of attacking substitutes, with Kashket replaced by Uche Ikpeazu, who had impressed at Bournemouth in midweek.

But it was his fellow replacement Mehmeti, also introduced in the 76th minute, who had the most telling impact, finishing a surging run with a low shot that Dieng could only bundle into his own net to silence the small number of away fans in the woodland surrounding Adams Park.

There were no signs of a late winner during four minutes of added time as both sides were forced to settle for a point.

Wycombe are now winless in 10 games, while QPR have not won in seven themselves.