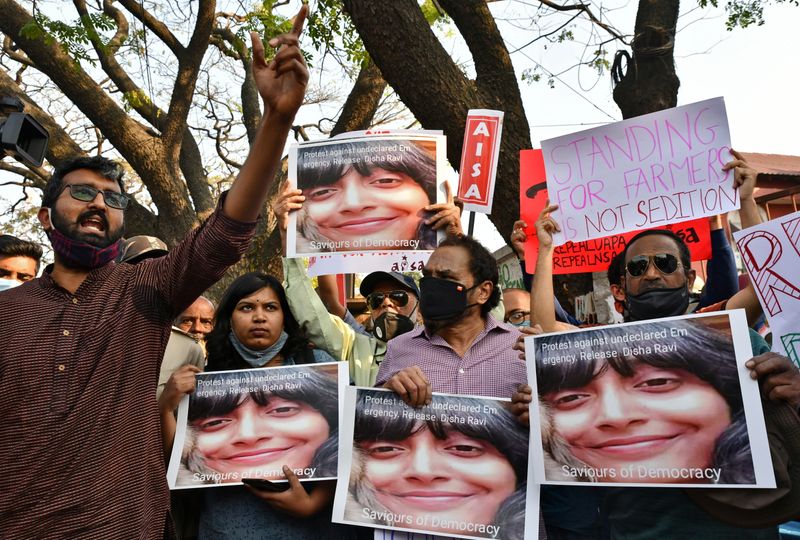 © Reuters. Protest against the arrest of climate activist Disha Ravi, in Bengaluru

Disha Ravi, who was detained in the southern city of Bengaluru on Sunday and then moved to the capital New Delhi, is currently in police custody.

Her arrest has ignited a firestorm of criticism from opposition politicians and other activists who said it was an escalation in the government’s efforts to silence dissenters.

WHAT IS RAVI ACCUSED OF?

Tens of thousands of farmers have been camped on the outskirts of Delhi since late last year, protesting against three new farm laws enacted by Indian Prime Minister Narendra Modi’s government.

On Jan. 26, a group of protesting farmers attempted to enter the heart of the city, clashing with police and storming the historic Red Fort complex.

The police allege that plans for such actions were formulated in the online document described as a “toolkit” that Ravi created and shared with Thunberg.

Thunberg, who tweeted a link to the document and later deleted it, said on Monday that she had no comment on Ravi’s arrest.

WHAT IS THE TOOLKIT?

In a briefing on Monday, Delhi Police said the “toolkit” document contained details of a social media campaign and on-ground action to be conducted in January, including the protesters entering the capital city.

“The main aim of the toolkit was to create misinformation and disaffection against the lawfully enacted government,” Delhi Police official Prem Nath told reporters.

“The toolkit sought to artificially amplify the fake news through various tweets which they have created in the form of a tweet bank,” he said.

On Feb. 4, Delhi Police said it filed a case against authors of the document, accusing them of sedition, provocation with intent to cause violence and promoting enmity between different groups, among other charges.

An archived version of the document reviewed by Reuters shows it contained guidelines on how to participate in and organise protests, mainly focused on creating international awareness of the farmers’ agitation.

WHO ELSE IS ALLEGED TO BE INVOLVED?

Police said it had investigated multiple screenshots of the document and searched the home of lawyer Nikita Jacob in the western city of Mumbai.

The initial investigation showed that Ravi, Jacob and another associate, named only as Shantanu, created the document, police said.

Police said the three had also been in touch with supporters of the movement for an independent Sikh homeland called Khalistan.

“The document that they drafted had secessionist and pro-Khalistani content embedded into it through links and texts,” Delhi police said in a briefing note.

In a bail application submitted to a Mumbai court, Jacob’s lawyer said her client had been researching and circulating information to “encourage peaceful participation” with protesting farmers and had no motive to incite violence.

IND vs ENG: India Climb To 2nd Spot In World Test Championship After Huge Win vs England In 2nd Test