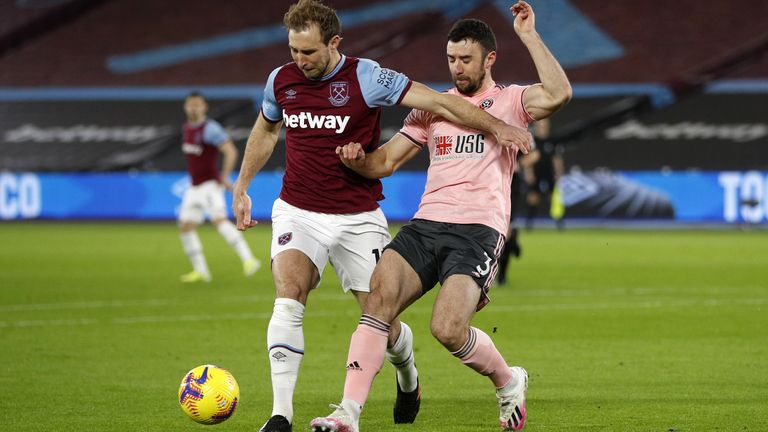 West Ham breezed into the Premier League top four as Declan Rice, Issa Diop and Ryan Fredericks were all on target in a 3-0 win over rock bottom Sheffield United at the London Stadium.

West Ham, who had an early penalty ruled out by VAR, took the lead from the spot five minutes before half-time.

Jesse Lingard was brought down by Chris Basham and Rice converted the penalty.

David Moyes’ side doubled their lead in the 58th minute when Diop headed in Aaron Cresswell’s corner as the hosts made it six wins in eight league games. Substitute Ryan Fredericks wrapped up a 3-0 win for the Hammers in stoppage time (90+6).

The result moves the Irons up to fourth in the table ahead of Chelsea’s encounter with Newcastle on Monday Night Football, two points clear of fifth-placed Liverpool. Sheffield United remain bottom, 14 points adrift of safety with 14 games remaining

Man of the match: Jesse Lingard.

West Ham were looking to complete a league double over Sheffield United in the top flight for the first time since the 1967/68 season under Ron Greenwood – and it looked like they had made the perfect start when referee Simon Hooper awarded them a penalty after just five minutes.

Rice’s initial free-kick was saved by Aaron Ramsdale before Craig Dawson was brought down by Enda Stevens as he pounced on the rebound. But VAR Michael Oliver advised for the spot-kick to be overturned as Dawson was standing in an offside position in the build-up as the Blades were handed an early reprieve.

After a 20-game winless run in the Premier League, Chris Wilder’s side had won three of their last six in the competition, and they began to assert themselves after a sluggish start. David McGoldrick was unable to direct Oliver Norwood’s tempting cross on goal before Ben Osborn drew a smart save from Lukasz Fabianski at his near post.

With Michail Antonio still sidelined, West Ham were set up to play on the counter-attack in the absence of a focal point, and Ramsdale was soon brought into action to keep out Lingard’s shot.

West Ham lined up against Sheffield United without a recognised striker after Michail Antonio was ruled out again through injury. Jesse Lingard returned to the starting line-up after missing the FA Cup defeat at parent club Manchester United.

Enda Stevens and Ben Osborn returned for the Blades, with John Fleck missing out through illness.

But moments after another fine save from Fabianski to deny Osborn, Sheffield United demonstrated just why they have struggled all season as West Ham were awarded another penalty which stood on this occasion.

A slack crossfield pass from Norwood was intercepted by Lingard to set the hosts on their way. Having leant the ball to Jarrod Bowen, Lingard was fed through the middle before being unceremoniously bundled over by Chris Basham, who was somewhat fortunate not to see red. Hooper deemed he had gone for the ball.

Lingard wanted the penalty himself, but Rice pulled rank to steer his spot-kick low into the left-hand corner beyond the outstretched glove of Ramsdale, four minutes before the break. In his 137th Premier League appearance, it was Rice’s first penalty of his career and ended a run of 2,110 minutes without a penalty for West Ham this season.

Wilder was left with the familiar feeling of his side falling 1-0 down – the 18th time this campaign – but Sheffield United very nearly provided an instant response following the restart as McGoldrick met Billy Sharp’s cross from the left but his header deflected off Ben Johnson and was tipped over by Fabianski.

The miss would prove costly as six minutes later, West Ham doubled their lead in routine fashion. Diop lost Ethan Ampadu at Aaron Cresswell’s corner to steer his header low beyond Ramsdale as the Blades stared down the barrel of a 19th Premier League defeat of the season.

The manner of the goal was of little surprise; West Ham’s 13th from a corner or indirect free-kick this season, more than any other side, while it was Sheffield United’s 11th conceded – a league-high.

Former West Ham defender James Collins told Sky Sports: “Wilder will be absolutely fuming. Sheffield United had been the far the better side at the start of the second half.”

But Wilder knew it was not to be his night once more when McGoldrick was again thwarted as he rose to meet Osborn’s cross but Fabianski was once more well-placed to grab low to his left.

West Ham had chances to extend their lead in the final 20 minutes as Vladimir Coufal pounced on a mix-up between Basham and John Egan but Ramsdale was out to smother his shot at the near post.

Sheffield United’s misery was compounded late on with John Egan carried off on a stretcher following a last-ditch challenge on Lingard – and there was worse still to come as Fredericks collected Said Benrahma’s pass to flash his shot into the bottom corner in the final minute of stoppage time.

Man of the match – Jesse Lingard

With Antonio out, the onus was on Lingard, alongside Manuel Lanzini and Jarrod Bowen to provide West Ham with an outlet on the counter and not for the first time this season, Moyes’ gameplan was played out to perfection. This was a professional job, Moyes said himself afterwards of his team, but Lingard provided the most accomplished performance.

On this evidence, the 28-year-old has a future with his parent club Manchester United but for now, Lingard is just happy to be back playing football. He showed no sign of rust as his lively presence drew a penalty which led to the crucial opener shortly before the break.

Lingard was determined to add to his goal tally – shown by his eagerness to take the penalty off Rice – while he racked up four shots on target – more than any other player. But it was his game intelligence which stood out.

West Ham host Tottenham at the London Stadium in the Premier League on Super Sunday at 12pm. Sheffield United travel to take on Fulham at Craven Cottage on Saturday, live on Sky Sports; kick-off 8pm.