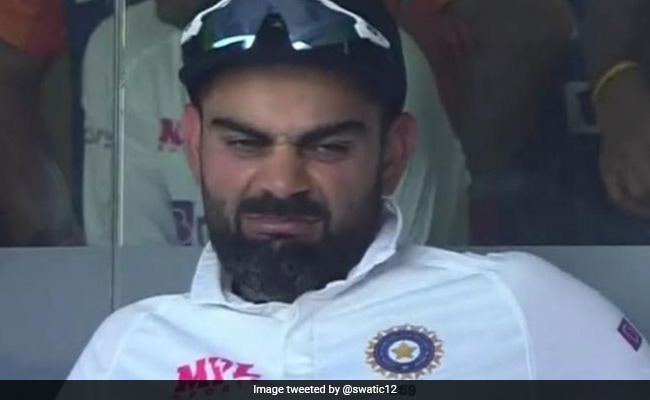 Team India thrashed England by 317 runs in the second Test match at Chennai’s MA Chidambaram Stadium on Tuesday – a series-levelling win that unleashed a flood of memes and jokes on social media. The hashtag #INDvENG trended high on Twitter as users shared funny memes, witty posts and lighthearted digs at the visiting team. Among these, a picture of Virat Kohli’s hilarious expression stole the spotlight. The picture in question shows the skipper looking disgusted at something. It has now inspired a ton of memes.

Take a look at some of the funniest Virat Kohli memes going viral online:

Thinking about all the life decision I made: pic.twitter.com/PzVhHAnsPd

When you listen your recorded voice: pic.twitter.com/nwjxfXzvFf

Boys when their parents force them to go school on “Rakshabandhan” – pic.twitter.com/s5tNhkgyWX

According to news agency AFP, Captain Virat Kohli said India had played the “perfect game”, bowling England out for 134 and 164, but his side could not have levelled the series without the 34-year-old Ravichandran Ashwin.

“The conditions were challenging for both sides, but we showed more application with the bat. We didn’t panic out there looking at the turn and bounce, we showed grit, got into the game and scored 600 runs in the game,” an ecstatic Virat Kohli said in the post-match presentation.

“It gave me a hero feeling. In Covid times, a lot of people came without any worries and even though some didn’t wear masks they cheered for us. I dedicate this win to the Chennai crowd.”

Take a look at some of the other memes that lit up social media after India beat England.