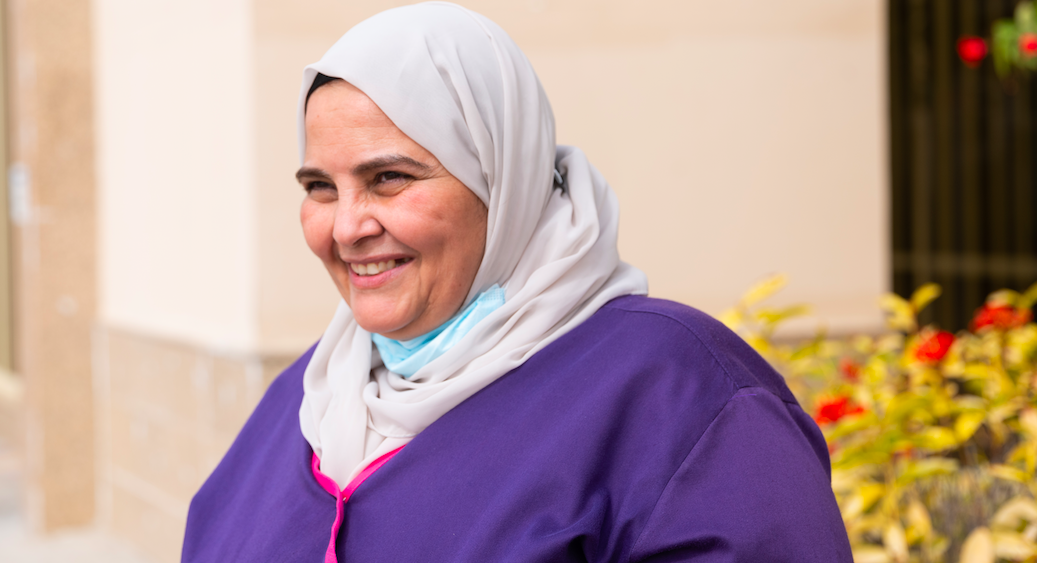 Frontliner says she came to the country because of her love for the late Sheikh Zayed.

Zainab Ahmed Fahim’s father used to say that nurses sit among the angels.

A dedicated frontline hero today, it’s no surprise that she remembers the very moment she decided to become a nurse herself. Sitting devotedly by her father’s bedside in a hospital in her native Egypt, she was struck by the impact nurses had on people’s lives – not to mention, the high esteem with which they were held by patients and medical staff alike.

“My father dreamed that one of his daughters would become a nurse – and I answered his wishes,” she says.

Now 52, Zainab has been working as a nurse in the UAE for more than three decades. “My husband and I chose to come to the UAE because we loved the late Sheikh Zayed bin Sultan Al Nahyan – and had heard so much about this growing country. The people here are so kind and respectful, no matter who you are and where you come from.”

Zainab is one of the frontline heroes who have been recognised by the Frontline Heroes Office for taking exceptional measures to protect people’s wellbeing during the pandemic.

With cases still prevalent, healthcare professionals, including Zainab, are continuing to treat Covid-19 patients, working long hours and sacrificing their family lives to help others.

Thinking back to the early days of the pandemic, she said: “I was shocked – we had never seen anything like it. Every day, we got new insights and details about a novel disease that created as much fear as illness.”

When Umm Al Quwain Hospital informed her of the first suspected case, she immediately took the assignment. “I contacted the patient and explained details about Covid-19 to him. I asked him about his symptoms. He had a slight fever and tested positive for the virus, so we had to take him to quarantine.”

Zainab soon found herself racing down the highway in an ambulance to pick up Umm Al Quwain’s first Covid-19 patient. “He was terrified, and I tried to calm him. I gave him my phone number in case he needed anything. We spoke several times during his quarantine, and I reached out to his contacts to take them in for quarantine as well. Eventually, the patient recovered. We have remained in touch and regularly send each other greetings and messages.”

During the pandemic, Zainab had to draw on all of her 31 years of nursing experience. When she arrived in the UAE with her husband, her first job was at the Accident and Emergency department at Sharjah’s Al Qasimi Hospital.

Seven years later, she transferred to the Infectious Disease Control Department of Preventative Medicine in Umm Al Quwain, where she has been working ever since. Her role in monitoring infectious diseases and her involvement in vaccination programmes helped to prepare her for being on the frontline in the fight against the pandemic.

“Alhamdulillah, I was never afraid, especially as I work with infectious diseases,” she said. “We worked long hours, were on duty around the clock, and got little sleep. I rested when the patients were recovering. I was with them every step and second of the way. The days all seemed to melt into each other – we didn’t know night from day.”

She commended her peers in the medical fraternity and her family for encouraging her to keep going. “My colleagues and my boss made me feel important and praised me. They would say, ‘Yalla Zanouba.masha-Allah’. They boosted my morale when I most needed it.

“I am especially grateful for my husband’s support,” she added. “My family gave me the motivation to keep moving forward. I had sometimes forgotten to eat and couldn’t keep a close eye on what was happening at home with the family. When I came home, I stayed in a separate room and used a separate bathroom from them just in case. I prayed as much as I could.”

Zainab has worked extra hours in public places, such as fish markets and fruits and vegetables shops to vaccinate people and raise awareness about Covid-19 prevention. Her devotion to the job has resulted in letters of commendation from the UAE’s leadership.

“I was so moved that my efforts are being recognised. The pinnacle of the experience for me was when I received letters from His Highness Sheikh Mohamed bin Zayed Al Nahyan, Crown Prince of Abu Dhabi and Deputy Supreme Commander of the UAE Armed Forces, and Sheikha Fatima bint Mubarak, Chairwoman of the General Women’s Union, President of the Supreme Council for Motherhood and Childhood, and Supreme Chairwoman of the Family Development Foundation, thanking me for my service,” said Zainab.

“I’m just a nurse who wanted to do good for people and they appreciated my work. Helping patients recover is a beautiful feeling that I can’t describe. I am proud to have been able to live up to my father’s wishes.”