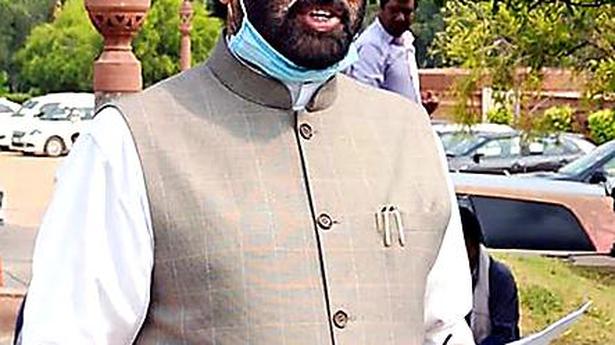 TPCC president and Nalgonda MP N. Uttam Kumar Reddy asked Prime Minister Narendra Modi to clarify whether the Telangana government’s decision to close down procurement centres was due to the new farm laws or not.

In a letter to the Prime Minister, which he personally handed over to the PMO, the PCC chief referred to Telangana Chief Minister K. Chandrasekhar Rao’s statement that procurement centres were closed down due to the new farm laws.

Moreover, the decision came right after Mr. Rao met the Prime Minister in New Delhi in December last year. So it is the responsibility of Prime Minister to clarify on the issue, he said seeking an appointment to explain the Telangana government’s decision personally.

Mr. Uttam Reddy recalled the repeated statements of the Prime Minister and the Ministers on the floor of the House that new farm laws will not alter the present system but only create more opportunities for farmers for selling.

“But Telangana CM’s statements are completely contradictory to your statements in Parliament and outside. Now Telangana will be closing down approximately 10,000 procurement centres run by Indira Kranthi Patham Women’s Self Help Groups and Primary Agricultural Cooperative Societies,” he said. He said Mr. Rao’s decision has led to even more anxiety and insecurity among farmers of Telangana regarding the government’s true intentions behind the passing of these controversial farm laws.

Moreover, the Chief Minister further stated that the government is not a rice or dal miller or trader and hence does not have the responsibility to procure produce at MSP.

If the Chief Minister of a State interprets these laws to mean that procurement centres are to be shut down and it is not the Government’s responsibility to procure agricultural produce at MSP, then it is clear that the farmers’ demand that these laws be repealed is justified, he said.

Threat Posed By ISIS To International Peace And Security On The Rise: UN