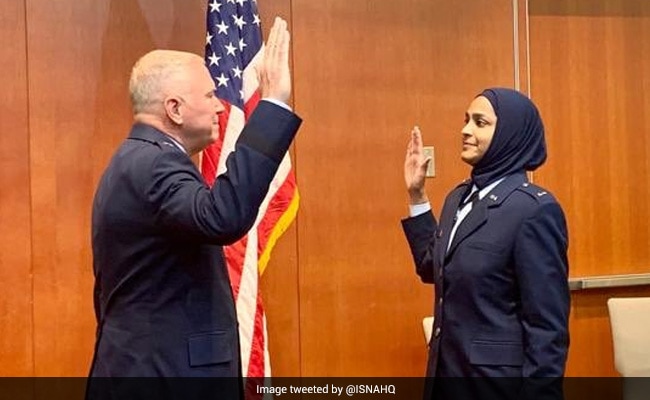 The historic graduation ceremony was held on February 5, an official statement said on Wednesday.

Ms Jabeen said she was grateful for the opportunity and aware of the responsibility that she has to set an example and show that there is a place in the military for anyone who wants to serve.

“I did not have to compromise on any of my religious beliefs or convictions. I am surrounded with people who respect me and are willing to receive what I bring to the table as a woman, a faith leader, and an immigrant,” she said.

“I am provided with numerous opportunities to learn and develop skills that best equip me to be a successful officer and a chaplain in a pluralistic environment,” Ms Jabeen said.

Ms Jabeen was commissioned in December as a Second Lieutenant at the Catholic Theological Union in Chicago, becoming the first female Muslim chaplain in the Department of Defense. She came to the United States 14 years ago as an international student.

“I get to provide spiritual care to all service members, guardians and families and advise the commanders on religious and moral matters regardless of my faith, ethnicity or gender. Like our boss says, it has never been a better time to serve as a chaplain in the US Air Force Chaplain Corps,” she said.

“They are trained to lead the units they serve spiritually. The bottom line is to care for Airmen – every single Airman. When they care for Airmen in a professional way, every other aspect of our calling falls into place: advising leaders and providing for the religious needs of our force,” Captain Richardson said.

“Chaplain Saleha Jabeen’s presence enables an even broader scope of spiritual care for our Airmen, and for this we are very grateful. She is as determined to take on the role of chaplain as she is kind, caring and compassionate. We are thrilled to have had the opportunity for her to graduate with the class of BCC 21A,” she said.

Ms Jabeen said she was passionate about her role as a chaplain, and takes her duty as a spiritual mentor very seriously.

“We all have a purpose that is specifically meant for us to fulfill,” she said.

“We must listen to our heart and follow our conviction. It is important to have people in our lives who model that for us. Choose that kind of mentorship and choose good companionship. I just want people to remember that God, or higher power or the values that people uphold, remind us that we all are created with a plan: to become the best versions of ourselves,” she said.

According to her LinkedIn profile, Ms Jabeen completed her BA in Business and Economics at North Park University, followed by an MA in Theology-Interreligious Dialogue from Catholic Theological Union and course in counselling psychology from Trinity Christian College.

Pandemic cut U.S. life expectancy by a year during the first half of 2020