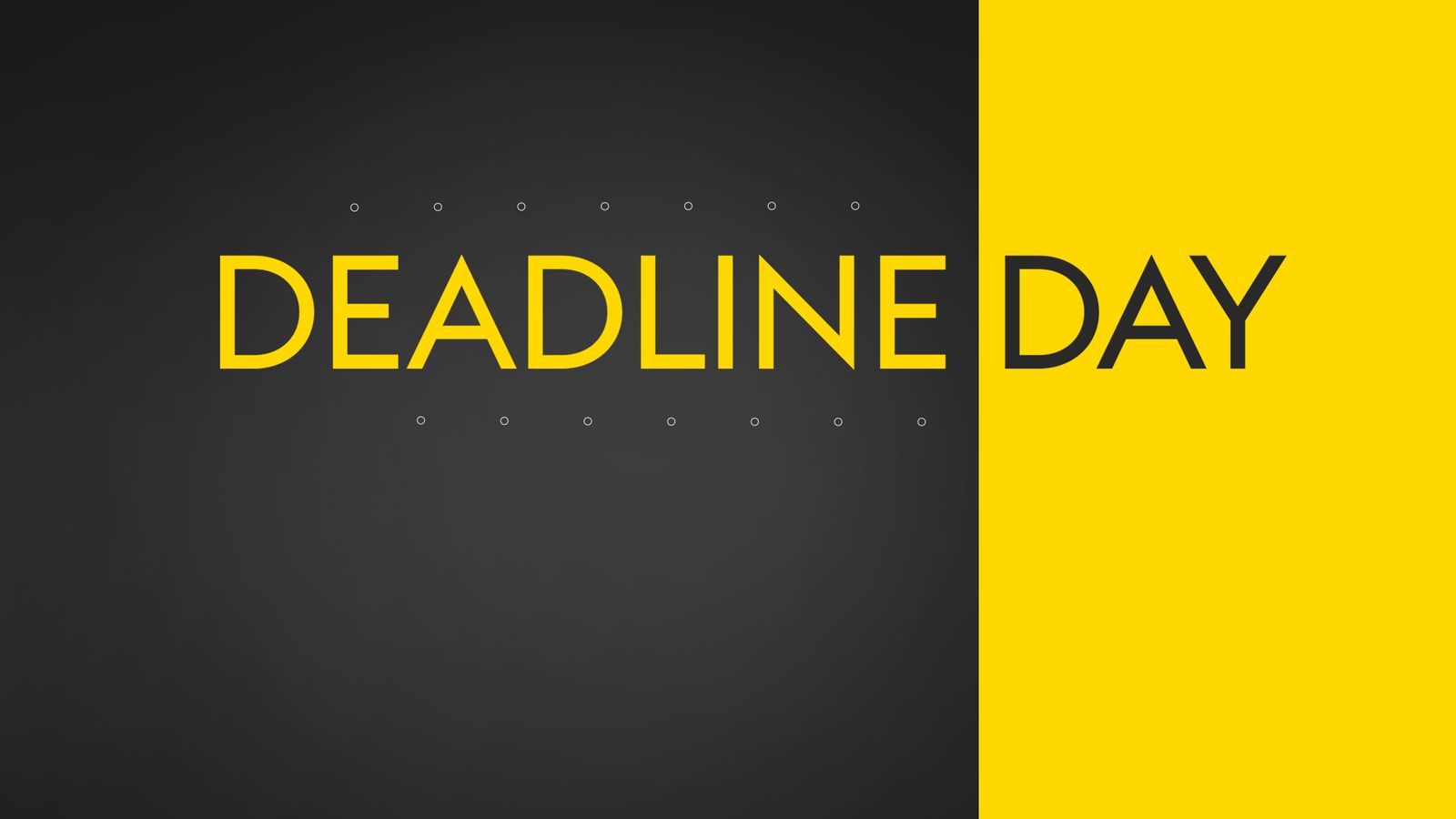 Time is running out for clubs to do business in the January transfer window. Here’s all you need to know about Deadline Day and how to follow all the deals and drama with Sky Sports.

When does the transfer window close?

The transfer window in England for the Premier League and Sky Bet EFL opened on January 2 and will close at 11pm on Monday February 1.

The window in Scotland closes at midnight on Monday.

Elsewhere, the transfer windows in the Bundesliga and Ligue 1 shut at 5pm on Monday, while the deadline is 7pm in Italy and 10.59pm in Spain on the same day.

The window in China remains open until February 26.

Which deals could still happen?

January might traditionally be a tricky month for Premier League clubs to do business but several potential high-profile deals are still on the boil ahead of the deadline.

Paris Saint-Germain would like to reunite Dele Alli and Mauricio Pochettino, with the midfielder currently out of favour at Tottenham. Spurs have maintained they want Alli to fight for his place; with Euro 2020 on the horizon, could he – like Arsenal’s Ainsley Maitland-Niles – agitate for a move in the remaining days of the window to revive his England chances?

Christian Eriksen has been keen on a return to Tottenham in January, and Spurs would be open to a loan move in the right circumstances. Inter Milan are believed to be pricing out interested clubs with the loan fee; might they lower their demands with the clock ticking?

Manchester United manager Ole Gunnar Solskjaer has played down talk of any incomings but confirmed the club are looking to offload several fringe players. Will the likes of Marcos Rojo and Sergio Romero follow Jesse Lingard out of the door?

And what about Liverpool? Jurgen Klopp continues to insist any Liverpool signings “have to be the right players” after setbacks for Fabinho and Joel Matip deepened his defensive injury crisis. Will the Reds make a last-gasp move to bolster their backline and their title defence chances?

Can any deals be done after the deadline?

Yes – via the ‘Deal Sheet’, which confirms a deal has been reached and allows additional time for clubs to submit the remaining documentation.

Clubs completing deals late on Deadline Day will be able to submit a Deal Sheet between 9pm and 11pm. Once the sheet arrives, clubs have got another two hours in which to submit the full paperwork.

Clubs can also sign free agents after the deadline.

What about these new post-Brexit rules?

Premier League clubs have had new rules to adhere to for signing overseas players during this window.

Because the UK no longer has access to the European Union’s single market of free movement of labour, players signed from EU countries have to go through the same protocols as those players from outside the EU have done until now – obtaining a Governing Body Endorsement (GBE).

In the past there were two processes: a points-based system – based on the player’s appearances in international matches and his country’s FIFA ranking – to earn a GBE and an Exceptions Panel for those players who do not generate enough points but – according to the Premier League’s website – were judged to be of “the highest quality”.

That agreement between the Premier League and The FA – approved by the Home Office – remains but the criteria for earning points has expanded to take in the number of appearances a player has made for their club, at which level their club is competing and how a club is performing in a competition.

If a player gets 15 points, they will earn a GBE. If a player earns between 10-14 points, the case will automatically be sent to the Exceptions Panel.

To help top-flight clubs remain competitive, the Premier League and The FA have agreed to additional criteria for “Youth Players”, where talented players aged 18-19 who have not yet had the chance to appear regularly in their clubs’ first teams can accrue points to earn a GBE.

The Premier League says points would be gained, for example, if they were named on a teamsheet, played in a cup match, played for a club’s overseas development team or made international appearances at youth level.

You can follow all the latest transfer news and rumours in our dedicated Transfer Centre blog on Sky Sports’ digital platforms.

Sky Sports News will also serve up all the big developments, as well as bringing you updates from reporters around the country and analysis of the big stories from guests including Paul Merson, Harry Redknapp and Nigel Pearson, as well as the views of fans up and down the country.

Join us in the studio by watching a live stream of the key hours on Deadline Day: we’ll bring Sky Sports News’ coverage to you with seven hours of free streaming on the Sky Sports website and app, the Sky Sports News YouTube channel, plus Twitter and Facebook from 7-10am, 1-2pm and 8-11pm.

If your stimulus check is missing, here’s every way to report or claim it with the IRS