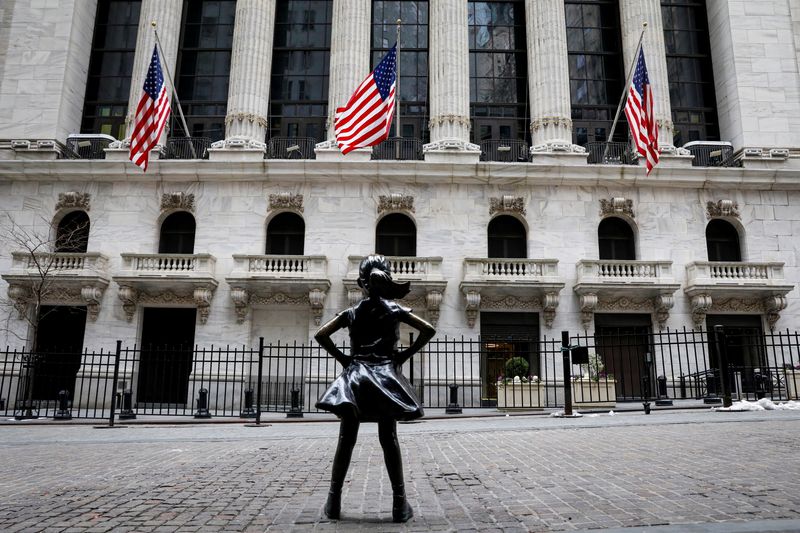 © Reuters. The Fearless Girl statue is seen outside the NYSE is seen in New York

NEW YORK (Reuters) – Frenzied speculation in the shares of GameStop (NYSE:) may have subsided, but it is business as usual in a small corner of the market where traders looking to turbocharge their gains dabble in what may be some of the market’s most volatile funds.

Yet some of these ETPs are drawing heavy interest from both professional traders and retail investors, though no definite numbers are available on their participation rates. But it is another sign of the voracious appetite for risk that has gripped markets in the wake of unprecedented stimulus from the Federal Reserve, expectations of another fiscal package from lawmakers and a rally that has boosted the about 80% from its March lows.

In recent weeks, investors looking to capitalize on the sharp rise in the PHLX Semiconductor index have poured money into the Direxion Daily Semiconductor Bull 3X Shares, which seeks to amplify daily moves in the chip index threefold.

The fund is up about 1,000% over the last 11 months compared with a rally of about 150% in the chip index. It has logged inflows for five straight weeks, the longest such stretch since April, helping boost its assets to a record $3.27 billion.

Meanwhile, assets in the ProShares Ultra Short Term Futures ETF, which provides leveraged exposure to short-term volatility futures, hit a record $2.5 billion on Friday, up about 50% since Feb. 3.

Another leveraged ETF, the ProShares UltraPro QQQ which targets 3X the one-day return on the , has nearly doubled its assets over the last 9 months to $11.13 billion, according to data from ProShares.

The inflows to these funds come amid signs that investors are becoming increasingly willing to take risks, less than a year since a COVID-19 driven sell-off lopped about a third off the S&P 500 Index.

Although these ETPs are leveraged, investors risk only the amount they invested, unless they bought on margin. Still, when the market moves against some of these trades, the losses can be quick and staggering.The latest fund manager survey by BofA Global Research showed cash allocations down to their lowest level since March 2013, allocations to stocks and commodities at their highest level in around a decade and a record in the net percentage of investors taking higher-than-normal risk.

“Investors are seeing volatility and looking to participate from a short-term perspective,” said Todd Rosenbluth, director of ETF and mutual fund research at CFRA, referring to flows into leveraged and inverse ETPs.

ETPs track an underlying security, index, or financial instrument and trade on exchanges like stocks. Exchange traded funds, which contain investments that can include stocks and bonds, are the most popular type of ETPs.

Analysts caution that leveraged and inverse ETPs, many of which are extremely volatile, are designed to be used as quick in-and-out trading vehicles, not as buy-and-hold securities.

Long-term holding of some of these ETPs can rack up significant losses. For instance, UVXY, which appreciates sharply when stocks turn volatile, tends to fall steadily in value when markets remain calm.

Leveraged and inverse ETFs accounted for more than 20% of the ETF closures in 2020, FactSet data showed, when many struggled to deal with intensely volatile markets.

The Securities and Exchange Commission in October put off proposals for controls on the sale of leveraged exchange traded funds to retail investors, saying it would study the issue later.

“I thought maybe, when I saw some of these close at the end of last year, the industry might be taking a different look toward these products,” said Lois Gregson, senior ETF Analyst at FactSet. “But we have seen different ones open up.”