Texans search for answers on dramatic collapse in power supply

The managers of the Texas grid foresaw record electricity demand when they stared down a cold front this week. What they did not expect was the utter collapse of power supply.

More than half of all generating capacity had dropped out of the state’s electricity system by Tuesday afternoon in the face of Arctic air that froze pipes and turbines, the Electric Reliability Council of Texas, or Ercot, said.

The hole in supply of 45 gigawatts was more than the entire capacity of Sweden and 11GW deeper than the day before. It compared with the 83GW in generating capacity that the council had reported when winter began.

Disappearing power production turned Ercot’s initial plans for brief, rotating outages into sprawling blackouts that persisted for days. It led to unflattering comparisons between the nation’s proud energy capital and California, which suffered a series of power interruptions last summer.

The state’s energy infrastructure proved no match for a cold blast that veered south from the Arctic Circle, a pattern that some research suggests is becoming more common as climate change warms the polar region. Peak stress on the Texas grid usually takes place in the summer, when temperatures can soar above 37C and air conditioners run full bore.

An investigation ordered by the state’s governor, Greg Abbott, will include a look at how generators buttressed their plants against extreme weather. The Public Utility Commission of Texas and Ercot require generators to file plans attesting to winter and summer preparations.

“We will be calling all of the utilities before the state legislature to get answers from them why their equipment was not winterised to protect against this type of situation,” the governor said on Tuesday.

To the extent that people pointed at limitations on wind or solar as a problem, it’s a red herring

However, the utility commission and Ercot do not have the ability to enforce the guidelines, said Edward Hirs, energy fellow at the University of Houston. He argued that Ercot’s market rules, which pay out only on energy that is sold, can create an incentive to withhold supply to drive up prices, which flew from an average of $25 a megawatt-hour to $9,000 this week.

“The units they have operating can make hundreds of times the revenues they would make if all of the supply were on line,” Hirs said.

Thermal power units that run on natural gas, coal and nuclear fuel accounted for slightly less than 30GW of the capacity out of service, said Dan Woodfin, Ercot’s senior director of market operations. Problems included “freeze-offs”, where gas is stuck in wellheads, along with burst pipes and safety equipment failures, according to Rebecca Miller of Wood Mackenzie, a consultancy.

S&P Global Platts estimated gas production in Texas was down by at least 6bn cubic feet a day, about 30 per cent, compared with the days before the storm, with little hope to restore output until temperatures rise and thaw equipment.

Woodfin said that winterisation practices put in place after a 2011 freeze would undergo review. “We’ll definitely go in and work with generation entities . . . and try to beef up that plan to be able to handle what we understand to be more extreme weather,” he said.

Another 16GW was offline from Texas’s wind power industry — the largest in the US — because of ice in the west and along the Gulf of Mexico coast, Woodfin said. However, this figure exaggerates the amount of wind lost relative to expected output. 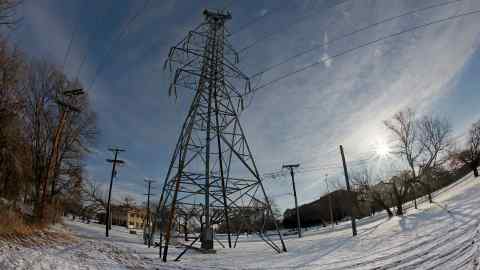 In a seasonal resource assessment published in November, Ercot foresaw Texas wind farms operating at between 19 per cent and 43 per cent of rated capacity. Wind power production was slightly higher than Ercot’s forecasts on Tuesday evening, records showed.

“That wind generation, a lot of it Ercot wasn’t planning on being available anyway, because there’s not normally a lot of wind at winter peaks,” said Michael Jewell, a Texas energy lawyer who is affiliated with Conservative Texans for Energy Innovation, a clean-power group. “To the extent that people pointed at limitations on wind or solar as a problem, it’s a red herring.”

Other experts agree. “Wind is naturally variable, and Ercot reportedly counts on wind for 6GW of supply in winter cold snaps,” said Peter Fox-Penner, director of Boston University’s Institute for Sustainable Energy. “This is a little more than wind actually produced, but not a shortfall that should threaten any system.”

Wind turbines run in places with much harsher winters than Texas, including the northern US state of Minnesota and in the North Sea. Cold weather kits common in more northerly states have historically not been necessary in Texas’s warmer climate, said American Clean Power Association, a Washington-based trade group. Some kits can cost about $150,000 more per turbine, said a banker involved in energy projects.

Pattern Energy, a renewables developer, said three of its four Texas wind plants were generating power late on Tuesday, with the fourth one fully operational but offline due to low wind speeds.

“The unprecedented ice storm and extreme cold temperatures in Texas and many other parts of the country caused outages across all forms of power — natural gas, coal, oil, nuclear and renewables, although wind has performed strongly and exceeded forecasts across the timeframe,” said Kevin Devlin, the company’s senior vice-president of project operations.

Energy is the world’s indispensable business and Energy Source is its newsletter. Every Tuesday and Thursday, direct to your inbox, Energy Source brings you essential news, forward-thinking analysis and insider intelligence. Sign up here.