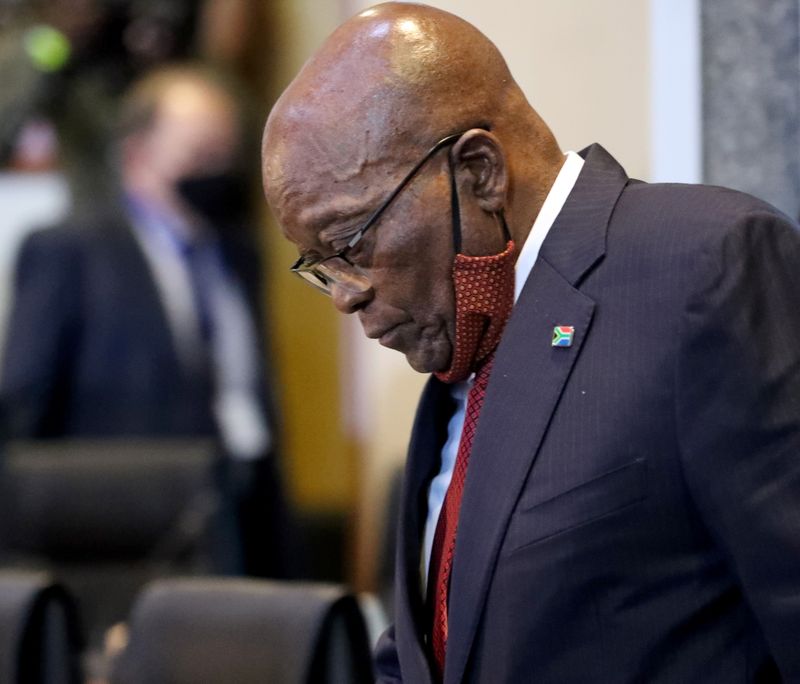 JOHANNESBURG (Reuters) – South Africa’s former president Jacob Zuma did not show up on Monday at an inquiry into corruption during his time in office, despite the country’s top court ordering him to appear.

Zuma’s lawyers confirmed in a letter to the inquiry that Zuma would not attend the inquiry this week, when he was due to give evidence.

“The summons issued for our client to appear on Feb 15-19 2021 is irregular,” the letter said, justifying his no-show.

The inquiry led by Deputy Chief Justice Raymond Zondo is probing allegations of high-level graft during his nine years in power.

Zuma, a leading witness to the probe, denies wrongdoing but has not cooperated with the investigation.

Zuma was removed as president in 2018 over the accusations, which include that businessmen close to him used their position to plunder state resources and influence policy.

Zuma walked out of proceedings in November without permission, after which the inquiry approached the constitutional court to make him re-appear and give evidence.

Zondo said, “It’s difficult to understand why he (Zuma) would be scared of taking the witness stand and subjecting himself to questioning like everyone else.”

One of Zuma’s lawyers did not respond to a message from Reuters seeking comment.

A lawyer for the inquiry said on Monday that Zuma had been implicated to date by the evidence of at least 40 witnesses.

“Whether Mr Zuma believes he has been accused of wrongdoing or not … his responses to those allegations are still directly relevant to the work of this commission,”the lawyer, Paul Pretorius, said.