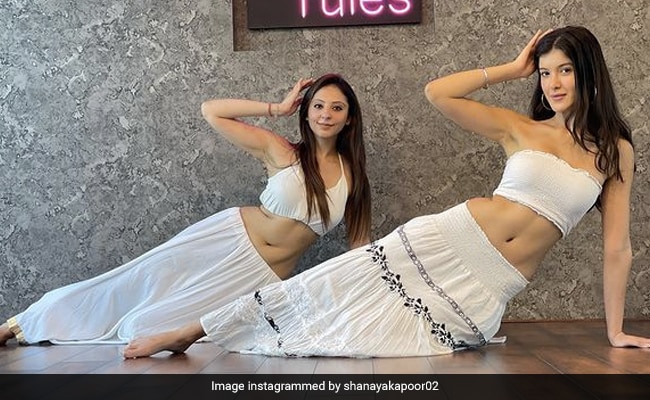 Shanaya Kapoor in a still from her video (courtesy shanayakapoor02)

Shanaya Kapoor is setting Instagram on fire, one dance video at a time. For her latest video, she “tried something different” and it turned out to be absolutely fabulous. Shanaya, dressed in a white crop top and skirt, picked the song Play Date by Melanie Martinez for her latest dance session. The “different” that Shanaya meant in her caption is that the choreography is a mix of belly dance and contemporary with some dramatic camera work. The end result? Therapeutic. Shanaya’s video also has a Suhana Khan connection, which she revealed in her caption. “Thanks for letting me steal your skirt, Suhana Khan,” wrote Shanaya. Well, that’s what best friends are for, aren’t they?

Shanaya Kapoor’s Play Date video will light up your mood:

Earlier, Shanaya’s mom Maheep Kapoor shared this video of the star-in-the making grooving to Pharrell Williams and Camila Cabello’s Sangria Wine. Dressed in black athleisure, Shanaya had some killer moves in store for the dance video. Maheep Kapoor, known for her sassy sense of humour, took full credit for Shanaya’s dancing skills, captioning the video as: “She gets it from her mama.” LOL.

Shanaya Kapoor officially came into the limelight when she made her debut at the Le Bal in Paris in 2019. She has also already joined Bollywood but not as an actor but as an assistant director for Netflix release Gunjan Saxena: The Kargil Girl, which featured her cousin Janhvi Kapoor in the lead role. Shanaya also featured in bits and pieces in Fabulous Lives Of Bollywood Wives.