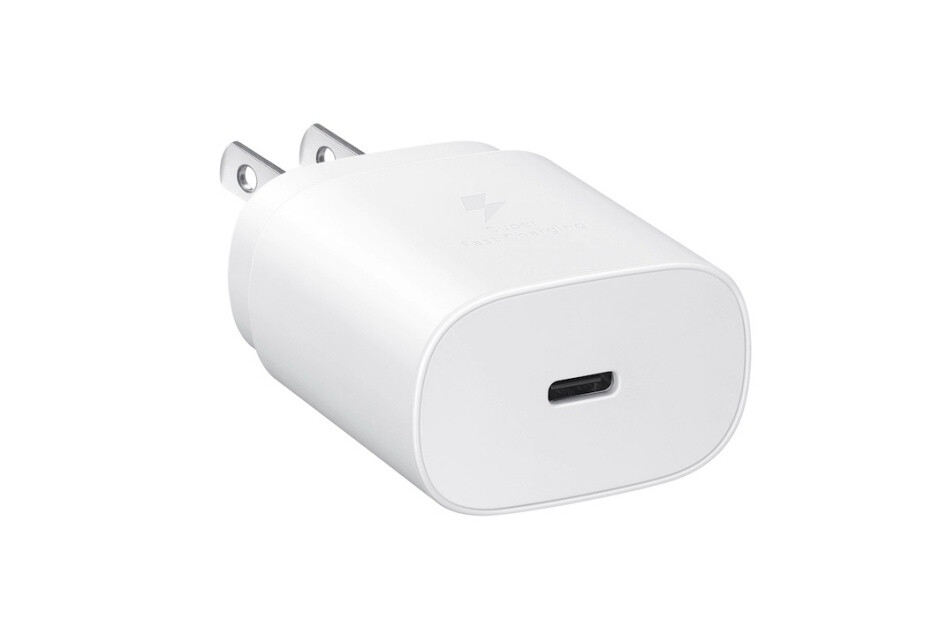 Samsung may have literally just unveiled the Galaxy S21, S21+, and S21 Ultra at the time of this writing, but with every single specification, feature, and even the most trivial details about the three new high-end phones leaked way ahead of the official announcement, many prospective buyers should already be over the disappointment of seeing the company mimic Apple’s most controversial move in recent history.

We’re talking, of course, about the key accessories missing from the retail boxes of a 5G-enabled handset family priced at $799 and up. While some of you might still be processing what would have certainly felt like a shocking loss just last year, there’s actually good news to report on the optional Samsung accessories front that could well turn that frown upside down… or at least make it into a neutral facial expression.
According to SamMobile, the price of the company’s official 25W USB-C fast charging power adapter has dropped from $34.99 to $19.99 stateside, which is… not entirely true. In fact, as we write this, Samsung’s US website still lists both the black and white 25-watt wall chargers at a $34.99 MSRP, but because the aforementioned publication is so very rarely wrong about these types of things, we’ll just assume the $15 discount hasn’t come into effect yet for some reason.
This should be a permanent price cut, mind you, and although paying 20 bucks for what used to be free is definitely not ideal, it’s also way better than having to spend $35. At the end of the day, this is a change that’s likely to benefit Samsung given the abundance of solid third-party options available at under 35 bucks right now that would have undoubtedly made plenty of Galaxy S21 5G series buyers look elsewhere for charging accessories in the absence of such a markdown.

Even Apple sells an admittedly slower 20W USB-C wall charger for a very reasonable $19 a pop, and while you can still find 20 or 25-watt power bricks from smaller brands for less than $19.99, it’s generally a good idea to go with a first-party accessory if you want maximum speed and reliability.

In case you’re wondering, Samsung’s 45W USB-C fast charging power adapter still costs $49.99, looking like an unwise purchase for an S21, S21 Plus, or S21 Ultra anyway as the three devices cap off at 25W speeds.

Is Jared Goff playing vs. the Packers? Rams make decision on QB for divisional round

Bank of America’s 8 Best Stocks to Buy in Q1