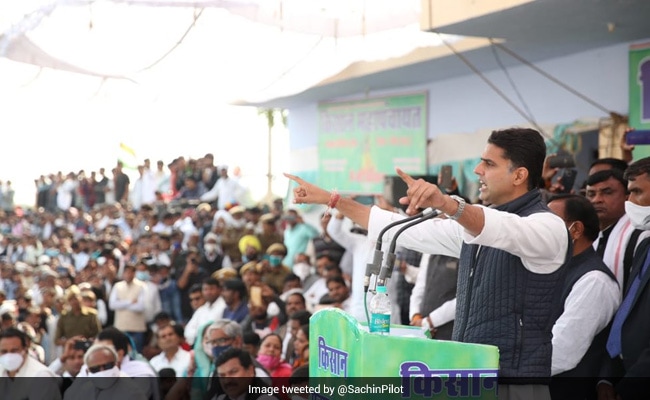 Sachin Pilot Seeks Withdrawal Of Cases Against Farmers At Mahapanchayat

“We will not step back till these demands are met,” Sachin Pilot said.

A farmers’ meeting attended by Congress leader Sachin Pilot on Friday demanded withdrawal of cases registered against protesters taking part in the stir over the new agriculture laws.

A resolution passed at the “Kisan Mahapanchayat” held in Dausa in solidarity with the farmers camping on the borders of Delhi also reiterated their demand for the repeal of the three new farm laws.

Addressing the gathering, Mr Pilot said the Union government had not discussed the Bills with state governments and farmers’ organisations before bringing them in Parliament.

“The Bills were passed in haste in Parliament and imposed on farmers,” the former Rajasthan deputy chief minister said at the meeting organised by Dausa MLA Murari Lal Meena.

A resolution passed by a show of hands demanded the repeal of the new laws.

It also called for the withdrawal of cases lodged during the protest in Delhi even as Mr Pilot condemned the violence on Republic Day, when several protesters clashed with police in Delhi.

The resolution sought compensation for the families of the farmers who have died while participating in the protest.

“We will not step back till these demands are met,” Mr Pilot, who once headed the Rajasthan unit of the Congress, said.

“The government of India claims these farm laws are in the interest of farmers but across the country they are being opposed. On Delhi’s borders, farmers are sitting for months and many have passed away,” he said.

He said the Congress has been supporting the farmer movement since the first day, in and outside Parliament.

He said Congress president Sonia Gandhi has united the opposition parties on the issue, and all of them are supporting the farmers.

Referring to the violence on Republic Day, the Congress leader said what happened at the Red Fort was condemnable and action should be taken against the guilty.

But he accused police of booking hundreds of innocent farmers using that day’s incidents as an excuse.

He criticised the increased barricading at the protest sites on Delhi’s border, claiming that the supply of water and power there has been cut.

Mr Pilot will take part in similar “mahapanchayats” in Bayana in Bharatpur and Kotkhawada in Jaipur districts over the next few days.

Farmers, mostly from Punjab and Haryana, claim that the new central laws will weaken the minimum support price (MSP) system. The government, however, says they give farmers options to sell their produce elsewhere.