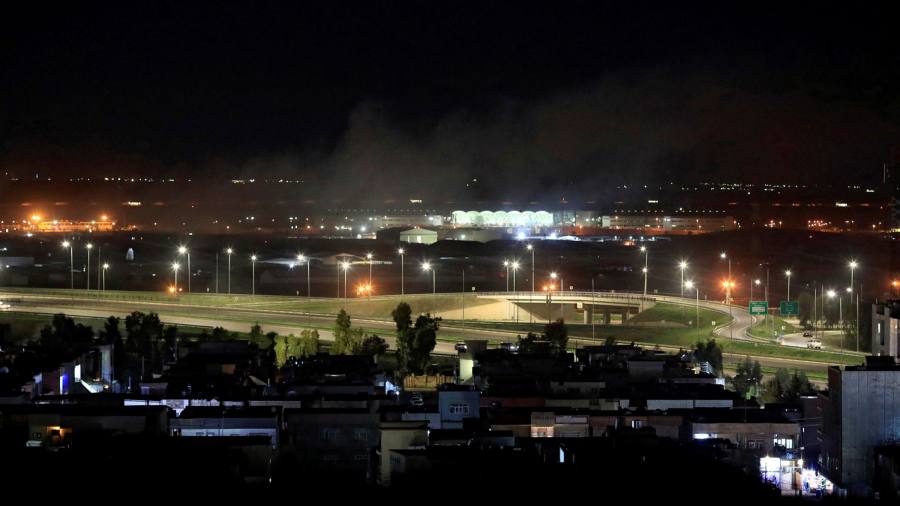 A rocket attack that struck coalition forces in Erbil, the capital of the autonomous Kurdistan region of Iraq, has killed one civilian contractor and injured five more contractors and a US service member, the US military said on Monday.

The attack could mark an early test for Joe Biden, the US president, as he tries to reset American foreign policy in Middle East, particularly with regards to Iran.

The US has repeatedly blamed Iraqi militants backed by Iran for targeting American interests in Iraq with rockets and explosive devices.

Colonel Wayne Marotto, the spokesperson for Operation Inherent Resolve, the anti-Isis coalition comprising 83 countries, confirmed some details of Monday’s attack with a tweet, but gave no indication of its origin.

A state department spokesperson added: “We are aware of press reports of explosions in northern Iraq and are looking into them. We defer to the government of Iraq for further comment.”

Barham Salih, Iraq’s president, on Twitter described the attack as a “terrorist act” that represented a “dangerous escalation”.
Reuters reported that a group calling itself Saraya Awliya al-Dam claimed responsibility for the attack, saying it targeted the “American occupation” in Iraq. It provided no evidence for its claim.

Former president Donald Trump took the US to the brink of war with Iran in January last year when it assassinated Qassem Soleimani, the Islamic republic’s most powerful commander, after blaming Iranian-backed militants for a rocket attack on an Iraqi base hosting US troops that killed an American civilian contractor.

The US subsequently reduced the number of troops in Iraq, where they have been training Iraqi forces and helping in the fight against Isis, from 5,200 to 2,500.

But sporadic attacks against American targets have continued, including rockets fired at the US embassy in Baghdad in December, as the Trump administration’s “maximum pressure” campaign against Iran ramped up tensions throughout the region.

Tehran backs militant groups across the region and Iranian-aligned militias have become increasingly powerful in Iraq in recent years.

The Biden administration was hoping to reduce regional tensions and has pledged to rejoin the 2015 nuclear deal Iran signed with world powers if Tehran fully complies with the accord. The stand-off between Iran and the US erupted after Trump abandoned the nuclear agreement in 2018.

Kurdistan has been one of the more stable areas of Iraq since the 2003 US-led invasion of the country toppled Saddam Hussein.