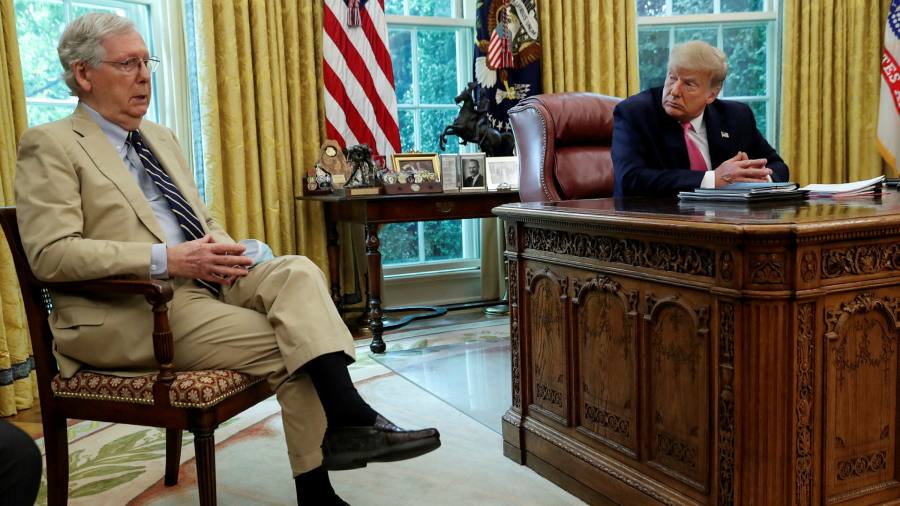 The schism within the Republican party deepened on Tuesday after Donald Trump launched a blistering attack on Mitch McConnell, calling the senior Senate Republican a “dour, sullen, and unsmiling political hack”.

In his lengthiest statement since leaving office, the former president blamed the veteran lawmaker for losses in two hotly contested Senate run-off races in Georgia last month that cost Republicans control of the upper chamber.

Trump added that if Republican senators “stay with [McConnell], they will not win again”.

“He will never do what needs to be done, or what is right for our country,” Trump said in a statement issued through his Save America political action committee. He vowed to support candidates “who espouse Making America Great Again” in Republican primary contests ahead of next year’s midterm elections, when the GOP will seek to win back control of the House of Representatives and the Senate.

Trump’s intervention came just three days after he was acquitted in his Senate impeachment trial. Seven Republican senators joined 50 Democrats in finding Trump guilty of inciting the January 6 attack on the US Capitol. However, under the US constitution, conviction requires the support of two-thirds of the 100-member upper chamber of Congress.

Trump’s attack on McConnell is the clearest signal yet that he intends to remain front and centre in Republican party politics. He had largely stayed out of the public eye since snubbing Joe Biden’s inauguration last month.

Trump has not ruled out running for president again in 2024, but is facing several criminal investigations as well as civil litigation that could hamper his political ambitions.

The NAACP, the prominent civil rights organisation, on Tuesday sued Trump, his attorney Rudy Giuliani and two white supremacist groups over their role in the January 6 siege.

The former president is also facing a criminal probe in Georgia over his efforts to overturn the result of the presidential election there, as well as a wide-ranging investigation in Manhattan into the finances of the Trump Organization.

McConnell voted “not guilty” at the conclusion of Trump’s five-day impeachment trial. But he delivered a lengthy speech on the Senate floor excoriating Trump for his role in the riot that left five people dead, saying: “There is no question that President Trump is practically and morally responsible for provoking the events of that day.”

McConnell said he cast his vote on procedural grounds, arguing it was unconstitutional to try a former president.

The senior Senate Republican signalled this week that he was willing to get involved in primary elections ahead of next year’s midterms to elect more centrist candidates.

McConnell told The Wall Street Journal that the Republican party could retake the Senate if they got “candidates who can actually win in November”, adding: “That may or may not involve trying to affect the outcome of the primaries.”

McConnell is keen to win back the support of moderate Republicans and independent voters who abandoned the party in November’s general election and the Georgia run-offs. 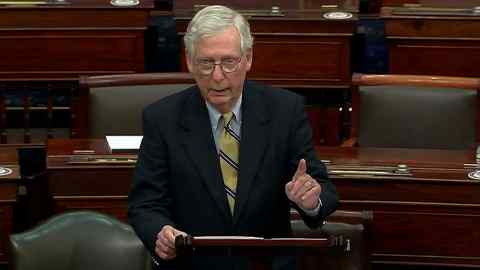 But public opinion polling indicates Trump still has a strong grip on the GOP base. A Morning Consult/Politico poll published on Tuesday found 59 per cent of Republican voters said Trump should play a “major role” in the party.

McConnell is not the only Republican to face recriminations for criticising Trump.

Richard Burr, the Republican senator from North Carolina, was censured by party officials in his state late on Monday for voting to convict Trump. Bill Cassidy of Louisiana was also censured for his guilty vote.

The 10 House Republicans who voted to impeach Trump last month, including Liz Cheney of Wyoming, have all faced calls to resign, and threats that they will face challenges from the right ahead of the midterms, when the entire House is up for re-election.

Adam Kinzinger, another GOP House member who voted to impeach, revealed on Monday that his own family had accused him of being in the “devil’s army” and a “disappointment . . . to God” for voting against Trump.