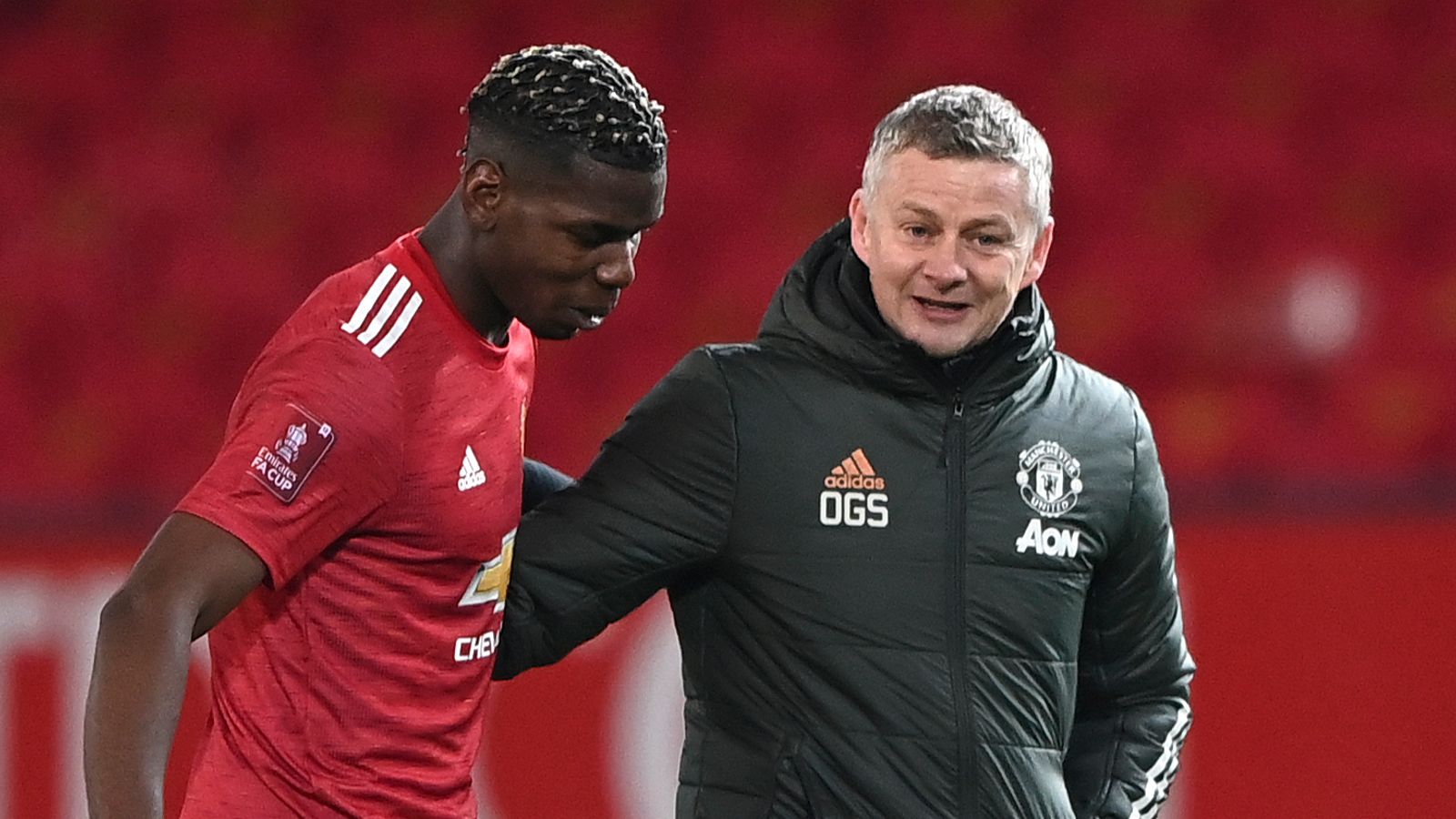 The 27-year-old has been the subject of regular speculation ever since returning to Old Trafford from Juventus in 2016 for a then world-record fee, thanks in no small part to comments by his outspoken agent.

Mino Raiola caused a stir in December when claiming his client was unhappy and “needs to change team”, leading Pogba to post on Instagram suggesting that he had no intention of leaving any time soon.

The France international’s contract expires in 2022 after United triggered the one-year extension clause in his deal and last week said he would “speak with the club and see what’s going on”.

Mathias Pogba has since said the club need to sell his brother this summer if they want to recoup a fee but Solskjaer said: “Speculation about Paul is always going to be there.

“We’ve got a good open dialogue with Paul, so what we talk about and how we see that situation remains between us of course.

“I’m just happy he’s focused, he’s playing really well and he’s happy in himself and that’s important. You can see Paul now enjoying playing football with a red shirt on.”

Pogba has struggled for fitness and form after shining during Solskjaer’s first few months in the hot seat, but he now looks to be getting back to his best and was named United’s player of the month for January.

“I think you should ask Paul what he’s done because the answer is Paul has really knuckled down,” Solskjaer said.

“He’s worked hard, he’s got his fitness. I have said this many a time, he had a bad season last season with injuries, he had Covid this season, he had an injury but he really works hard and he’s playing in a team that plays well.

“He’s a big inspiration for everyone. He always has a big smile… well, not always a big smile because in training yesterday when his team lost you can see how that affects him and he wasn’t happy. But today it was a new day and he’s ready to go again tomorrow.”

Pogba has been an important player for United over a frantic period but was an unused substitute in Tuesday’s 9-0 shellacking of nine-man Southampton.

Solskjaer says “no one’s guaranteed a place in the team like a season ticket card here” thanks to the great competition at a club who tend to look at their summer transfer plans around this time.

“I still think we’re doing the same planning, preparation but of course the pandemic has changed the market and it’s changed the world – and it might affect what we can do,” the United manager said ahead of Saturday’s match against Everton, live on Sky Sports Premier League.

“We just have to see where we’re at in the next few months, of course, but we are looking at players and targets as we normally would do.

“But we have done some very good business in the last few windows I feel and it’s not wholesale changes that we need to make. It’s the odd contribution and addition to the squad.”

‘Tom Brady an example for every sportsman’

United’s maligned owners have been criticised for their support of managers but the Glazers are likely to be far more popular in Tampa Bay, where the Buccaneers host the Kansas City Chiefs in the Super Bowl this Sunday.

“I think when you operate at the top you try to widen your horizon, you have a network you speak to, of course,” Solskjaer said. “I’m very pleased for the Glazers and the owners that they play the Super Bowl this weekend.

“For me, the big learning from that one is maybe the Tom Brady story – what he does to keep going at such an age and to be so professional.

“He’s come into the club and he’s brought them to the Super Bowl. It’s not him by himself of course, but we tell our young players to be at the top level that it’s not just natural talent. But it’s dedication, hard work, focus.

“We’ve got the example of Edinson (Cavani) coming into our place and how much one player can influence a team. We’ve had Eric Cantona coming into the team with that experience.

“So Tom Brady is an example for every single sportsman out there that it’s still possible even at the age of 42 or 43, whatever he is now.”