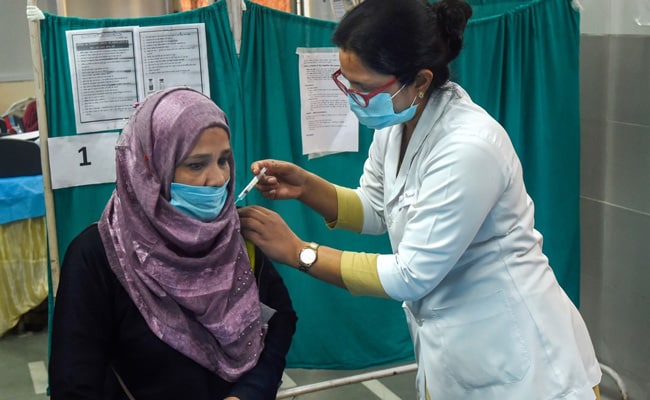 Some states which are seeing a spike in cases are also seeing a low rollout of vaccinations. (File)

India has administered more than 1 crore vaccination doses till now and also achieved its highest daily vaccinations with nearly 6.6 lakh or 6,58,674 vaccine doses being administered on Thursday. India is administering an average of nearly 3 lakh doses everyday.

But as the fear of new variants looms, the race to vaccinate has become all the more important. In order to achieve its goal of 30 crore vaccinations by July 2021, India will have to vaccinate over 20 lakh people every day.

However, some states which are seeing a spike in cases are also seeing a low rollout of vaccinations. In Maharashtra, only 54 per cent of the targeted healthcare workers have been vaccinated. Maharashtra is not even among the top 15 states in terms of vaccinated beneficiaries.

In Punjab, only 38 per cent of the targeted healthcare workers have been vaccinated even though it has been more than a month since the drive was launched.

Senior Fellow at Centre for Policy Research, Partha Mukhopadhyay, said: “What we are seeing from the data is that the number of people who are showing up for second dose is only one-third of what should be the actual turnout. Only 1 out of 3 are coming forward. These are healthcare workers, not people you have to chase after or have difficulty in locating. If this pattern continues in the broader public then it will be harder to locate them.”

Doctors worry that this could make the vaccination drive weaker amid emergence of new strains.

Dr Ajeet Jain, Nodal Officer for Covid at Delhi government-run Rajiv Gandhi Superspeciality Hospital, said: “The confidence level of the healthcare workers has gone up because the number of patients is very less, so they are taking it very casually as if the disease has gone. Many think that countries like UK are giving it at interval of 12 weeks so they can take it lightly here and don’t have to necessarily follow the 28 day rule.”

He said three variants have already been reported here (from UK, Brazil and South Africa) “and what we are seeing in Maharashtra and Kerala, there could be a different variant there and we could see a second wave.”

“We need to have extensive campaigns and public messaging to ensure that the second dose is also being taken on time. We had held multiple counselling sessions for healthcare workers in the initial phase of vaccine hesitancy. Similar counselling sessions need to be held again to ensure that everybody takes their second dose also on time,” he added.

The Union Health Minister has also issued an appeal, asking the medical community and frontline workers to come forward and take the COVID-19 vaccine.

The Union Health Minister had earlier said that vaccinations for the general public will begin around second or third week of March, when 27 crore people will start getting vaccinated including those who are either above the age of 50 or below 50 but have comorbidities.