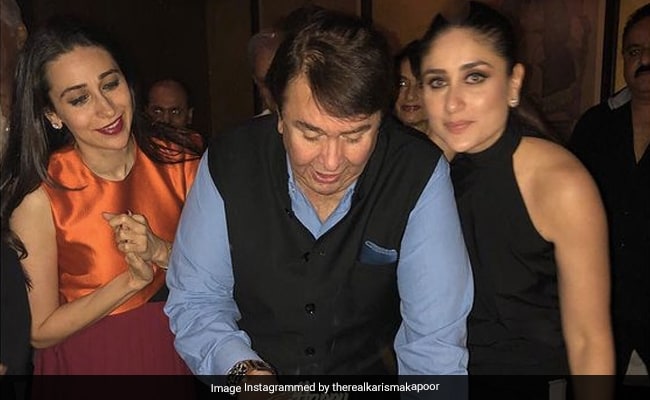 On Randhir Kapoor’s Birthday, Daughter Kareena Has The Best Wish Ever

Randhir Kapoor with Kareena, Karisma in a throwback (courtesy therealkarismakapoor)

Actor Randhir Kapoor’s 74th birthday was made special by his daughter, actress Kareena Kapoor, who posted an adorable birthday greeting on Instagram. Kareena is a fan of throwback photos and on Randhir Kapoor’s birthday, she dug out a blast from the past to add a nostalgic touch to her post. Describing her father as the “Handsomest, funniest, wittiest, warmest, strongest and bestest,” Kareena Kapoor added: “Happy Birthday Papa.” Randhir Kapoor and Babita are also parents to daughter Karisma Kapoor, who is also an actress. Randhir Kapoor is the son of legendary actor-filmmaker Raj Kapoor and Krishna Raj Kapoor. He was the brother of late actors Rishi Kapoor and Rajiv Kapoor.

On Valentine’s Day, Randhir Kapoor made an appearance on Karisma Kapoor’s Instagram. “Papa you are my valentine. Stay strong, stay healthy,” she wrote.

After Rajiv Kapoor’s death last week, Kareena shared a priceless black and white throwback, featuring Raj Kapoor and his three sons – Randhir, Rajiv and Rishi. Randhir Kapoor, 74 today, is the only one alive from the throwback memory posted by Kareena. Rishi Kapoor died in April last year after battling cancer for two years. He was 67. Rajiv Kapoor died on February 9 at the age of 58. The Kapoor family lost Raj Kapoor in 1988.

Meanwhile, Kareena Kapoor and Saif Ali Khan are expecting their second baby – she is in her final days of pregnancy. The couple are parents to son Taimur, who is all of four.