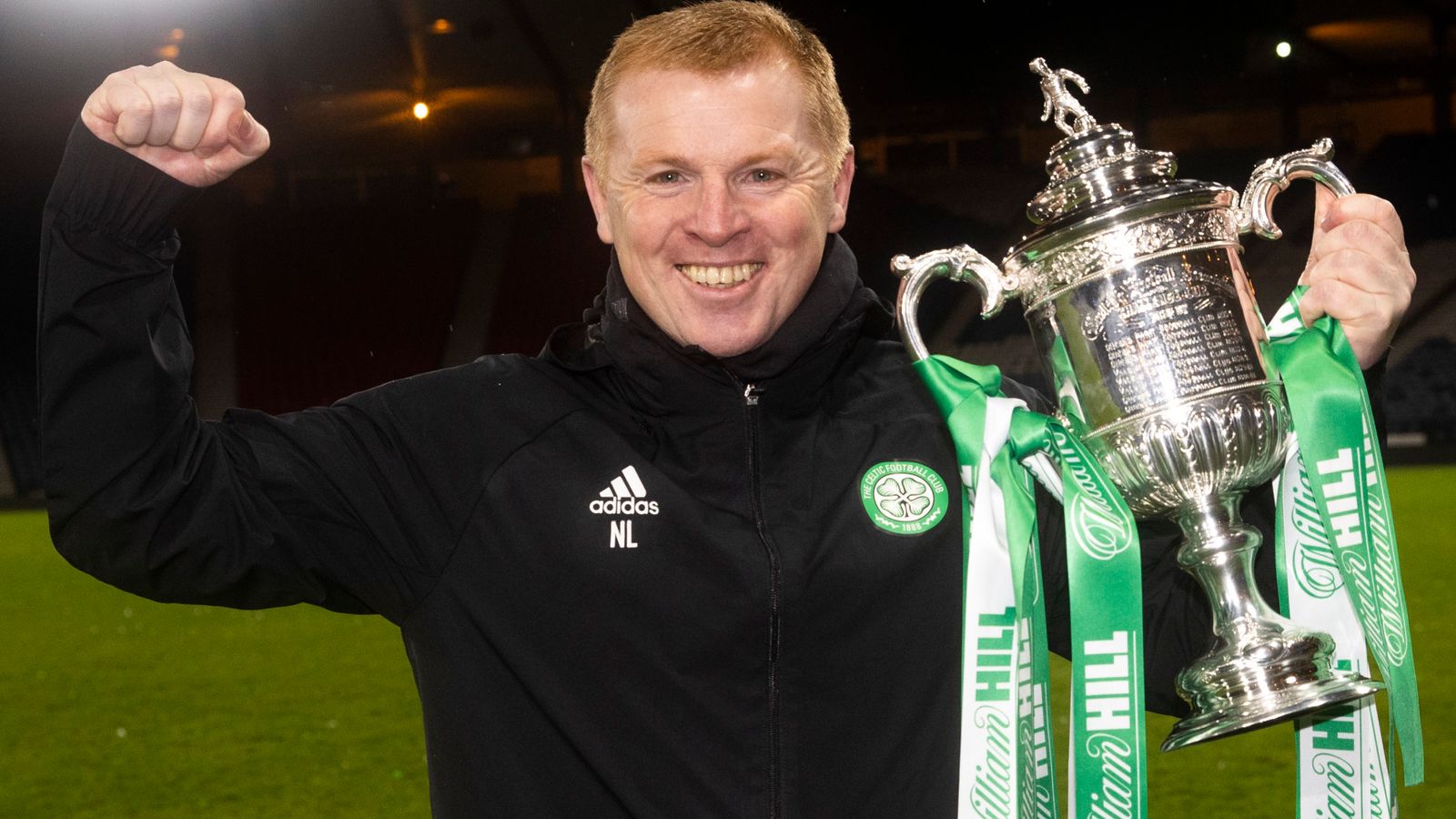 The former Celtic captain, who completed the clean sweep in 2001 as a midfielder under Martin O’Neill, watched his side emerge triumphant after a 4-3 penalty shoot-out win over Hearts in the delayed 2019-20 Scottish Cup final.

The dramatic victory, which followed a 3-3 draw after extra time, also ensured Celtic completed an unprecedented quadruple domestic treble with their 40th Scottish Cup win – also their fourth in a row, which is another record.

The Hoops boss, who has found himself under increasing pressure this season following some disappointing results, said: “I must be doing something right. If it was that easy it would have been done long before me.

“It is unique. I feel unique at the minute – it is something very special to me.

“I said to the players, ‘I need this as much as you need it’, and you’ve seen them all at the end, how much they felt for me as well and my backroom team, who are important to me.

“It is a culmination of a lot of hard work over 20 years but I feel fantastic. I know I don’t look it but I feel it. It is very special to me. It is a great source of personal pride.

“I feel so proud and pride in my players and backroom staff. John Kennedy (assistant) has been an absolute rock.

“So this is as much for him, and I want to thank Peter (Lawwell, chief executive), Dermot (Desmond, major shareholder) and the board for all the support they gave me.

“It’s a great achievement. You will never see that (quadruple treble) again. They will talk about this group of players in 30, 40 years’ time and they will thoroughly deserve it. It is a monumental achievement.”

Conor Hazard, the 22-year-old Northern Ireland international making just his third appearance in goal for Celtic, was the hero with two penalty saves in the shoot-out.

The Hoops seemed to be cruising at half-time through goals from Ryan Christie and Odsonne Edouard, who scored a ‘Panenka’ penalty.

However, Jambos striker Liam Boyce reduced the deficit three minutes before defender Stephen Kingsley levelled in the 66th minute, both with headers, to send the final to extra time.

Griffiths and Callum McGregor scored in the shoot-out before Hearts goalkeeper Craig Gordon saved from Christie.

Steven Naismith, Michael Smith and Olly Lee netted their penalties before Hazard denied Kingsley and Craig Wighton and, after Mikey Johnston had scored to make it 3-3, Kristoffer Ajer drove in the winning spot-kick to spark scenes of delight

Lennon said of Hazard: “I don’t know if the occasion got to him a little bit – he could have dealt with the third goal a little bit better. Or as I said to him, I think he just wanted it to go to penalties to show off.

“But he is writing his own piece of history at the club, he made two fantastic saves when we really needed it. It is only his third senior game.”

Hearts boss Robbie Neilson is hoping the performance can help with their aim this season of getting back to the Premiership.

He said: “That performance was fantastic and if we take that into every league game we will win 99 out of 100. So we have to take the positives from it.

“We knew Celtic would have a lot of possession but they scored a wonder goal and a penalty kick. The disappointing thing is we put ourselves in a position to win it and we just couldn’t get over the line.

“But the positives are we showed we can compete with one of the best teams in Scotland. We have a game on Saturday so we need to recover quickly.”