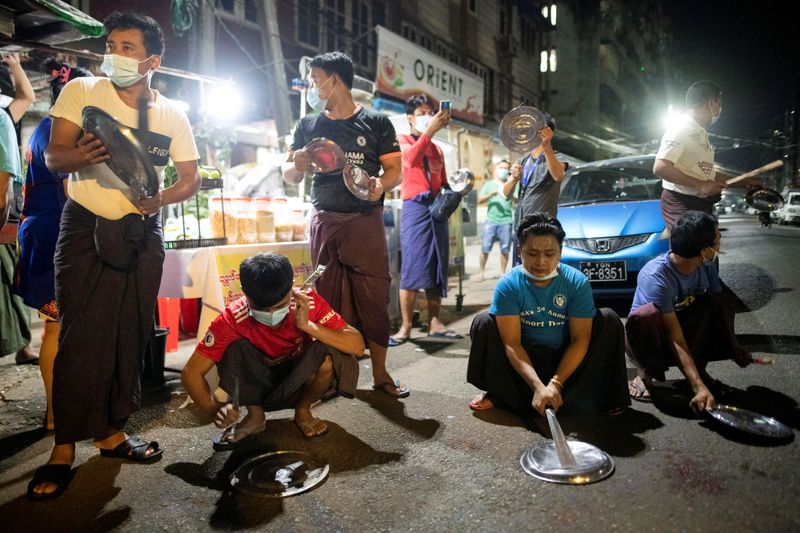 © Reuters. People hit pots during a night protest against the military coup in Yangon

(Reuters) – Teachers in Myanmar on Friday became the latest group to join a civil disobedience campaign with some lecturers refusing to work or cooperate with authorities in protest against the military’s seizure of power.The civil disobedience campaign started among medical workers soon after Monday’s coup but has since spread to include students, youth groups and some workers in both the state and private.

Wearing red ribbons and holding up protest signs, scores of lecturers and teachers gathered in front of campus buildings at the Yangon University of Education.

“We are no longer going to work with them. We want the military coup to fail,” she added, surrounded by other staff who held up held up three-finger salutes, now used by many protesters in Myanmar.

The salute – three fingers pointing up with palm away from the body – stems from the Hunger Games movies, but in recent years, it has been adopted by protesters against authoritarian rule in Asia.

One member of staff estimated 200 of the 246 staff at the university joined the protest.

“We aim to halt the administration system. We are now holding a peaceful strike,” said another lecturer, Honey Lwin.

There were also reports of a similar protest at Dagon University in Yangon.

The opposition among professional groups like doctors and teachers comes as there have been other less formal protests including by people banging cans and saucepans and honking car horns to signal their opposition to the coup.

“We declare that we start our fight for democracy today in Dawei. We urge the people to join and stand with us,” said one protester.

The military directly ruled the Southeast Asian country, also known as Burma, for almost 50 years after a 1962 coup and crushed pro-democracy protests several times over the years.