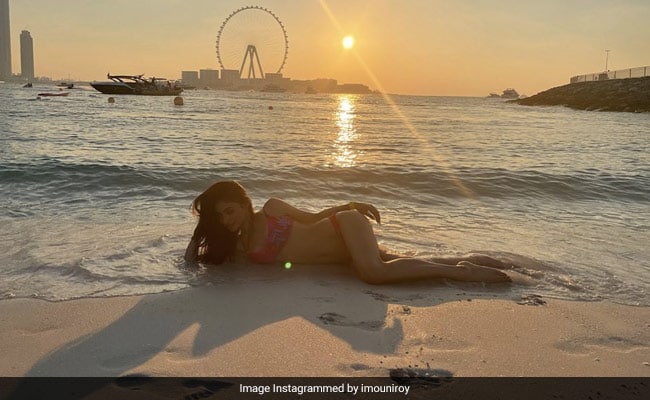 Actress Mouni Roy took the Internet by storm by sharing stunning pictures of herself “chasing sunsets” on the beach. The actress is reportedly in Dubai. On Monday, Mouni Roy shared three set of photos that feature her embracing the beach in a red bikini. In one photo, she can be seen sitting on the beach and posing for the camera while in another, she looks breathtaking with a mesmerising view in the background. “Like a song bird in the sea,” Mouni captioned one of her posts and while sharing another, she wrote: “Chasing sunsets.” The aforementioned pictures have set Instagram on fire.

Mouni Roy made her television debut with 2006’s show Kyunki Saas Bhi Kabhi Bahu Thi, in which she featured in a supporting role. She then featured in TV series Do Saheliyaan and Kasturi. Mouni became a household name for her breakthrough performances in Devon Ke Dev…Mahadev and Naagin, respectively

She made her debut in Bollywood with Akshay Kumar’s Gold. The actress has also featured in John Abraham’s Romeo Akbar Walter.

Mouni Roy’s last film was Made In China, in which she shared screen space with Rajkummar Rao, Paresh Rawal, Boman Irani, Gajraj Rao and Sumeet Vyas. She will next be seen in Ayan Mukerji’s Brahmastra, in which she will co-star Amitabh Bachchan, Ranbir Kapoor and Alia Bhatt.