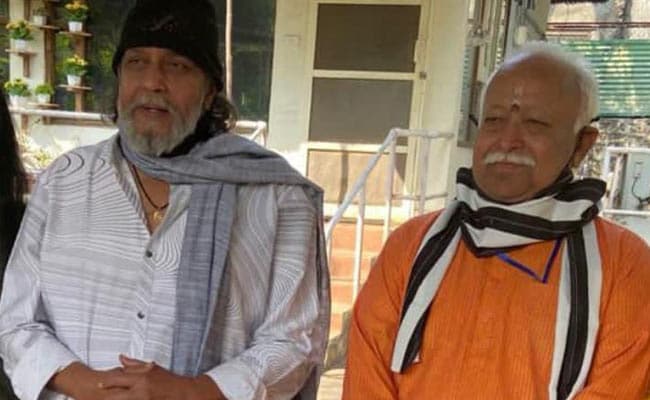 Mithun Chakraborty Has RSS Chief Mohan Bhagwat Over For Breakfast, Says No Politics

Mithun Chakraborty said he had a “spiritual relationship” with Mohan Bhagwat

Actor Mithun Chakraborty had Rashtriya Swayamsevak Sangh (RSS) chief Mohan Bhagwat over for breakfast today at his home in Mumbai. The meeting is significant ahead of the election in Bengal, the actor’s native state, though he denied any politics in it.

The RSS chief visited Mithun Chakraborty’s Madh Island home. They had last met when the actor had called on the RSS headquarters in Nagpur in 2019.

The 70-year-old film star said he had a “spiritual relationship” with Mohan Bhagwat.

“I have a spiritual relation with him.It is a very deep spiritual relation. There was a plan that he would come to my home when he visits Mumbai. It so happened that I returned to Mumbai from Lucknow after a shoot and he too is in Mumbai. So ‘jud gaye hum (we connected)’,” he told reporters.

“When one visits home, it is assumed that he must love me and my family. He asked me to bring everyone to Nagpur. That’s all we discussed. He had breakfast. There was no rajneeti (politics), nothing.”

The RSS is the ideological mentor of the BJP, which has mounted an aggressive campaign to win West Bengal from Mamata Banerjee’s Trinamool Congress. Mithun Chakraborty was a Rajya Sabha member of the Trinamool in the past.

The BJP has scored many defections from the Trinamool Congress – including some of its sharpest political strategists — but is still widely seen to lack a face in Bengal.

Mithun Chakraborty, popular as “Mithun-da” in the Bengal entertainment industry, still has a huge fan following in his home state even though he has been based in Mumbai over the past few decades.

The “dancing star” of many hit films in the 1990s, he is now mostly seen in Bengali dance reality shows.

His meeting with the RSS chief also fueled speculation that he could end up being the chief ministerial candidate for the BJP in Bengal. The actor has dismissed such talk.

Similar To What Nazis Did.