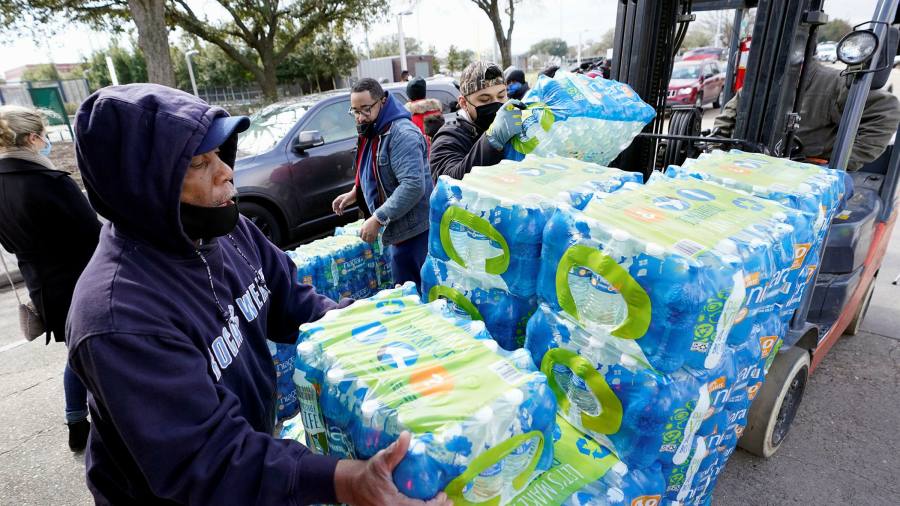 As the lights come back on for millions of Texans after widespread outages caused by brutal winter weather, roughly half the state’s population is now contending with unsafe drinking water and many face a costly clean-up from burst water pipes.

“There is enough generation on the electric system to allow us to begin to return to more normal operating conditions,” Dan Woodfin, a senior official at the Electric Reliability Council of Texas, the grid operator, said on Friday. Ercot said it had exited emergency conditions and that the grid was back to normal operations for the first time since early Monday morning.

The number of households without power has fallen sharply since Thursday morning. Fewer than 200,000 homes are currently without power, compared to a peak of more than 4m earlier in the week, according to data from PowerOutage. US, which tracks disruptions across the country.

The return to service for some remains slow, however, as utility companies repair downed power lines and iced transformers, and the effects of the bitter cold and extended loss of power are being felt across the state.

Around 13m people are under water boil notices, according to the Texas Commission on Environmental Quality, after hundreds of water systems across the state failed during the extreme cold and loss of power.

Officials in cities across the state scrambled to arrange mass distribution hubs for bottled water at high-school stadiums, churches and community centres. Some residents have resorted to trying to melt snow for usable water.

Some relief is likely to come over the next few days as the Arctic air recedes and temperatures rise. Much of the state is expected to have daytime highs reach 45F (7C) on Saturday and warm further into next week, which will help to thaw pipes and power-generating equipment and clear icy roads.

Even so, many residents face an expensive clean-up after the freezing weather burst water pipes in their homes, damaging ceilings and leaving extensive damage. For some, it will be the second big clean-up just four years after Hurricane Harvey unleashed extensive flooding around the Gulf coast.

Greg Abbott, governor of Texas, said he was easing restrictions for plumbers from out-of-state or with expired licenses to assist with the clean up, in anticipation of a severe shortage of workers to repair the damage. The job is likely to take weeks if not months.

He said he was also asking for the federal government to offer financial assistance through the Federal Emergency Management Agency to those not covered by home insurance.

President Joe Biden told Abbott that the federal government would “work hand-in-hand with state and local authorities in Texas to bring relief and address the critical needs of the families affected,” according to a White House statement.

“When the power is restored and when we are past the boil water notice, we are working to set up a fund that will assist people without insurance, seniors, and others who have suffered a lot of water related damage in their home when frozen pipes burst,” said Houston mayor Sylvester Turner on Friday.