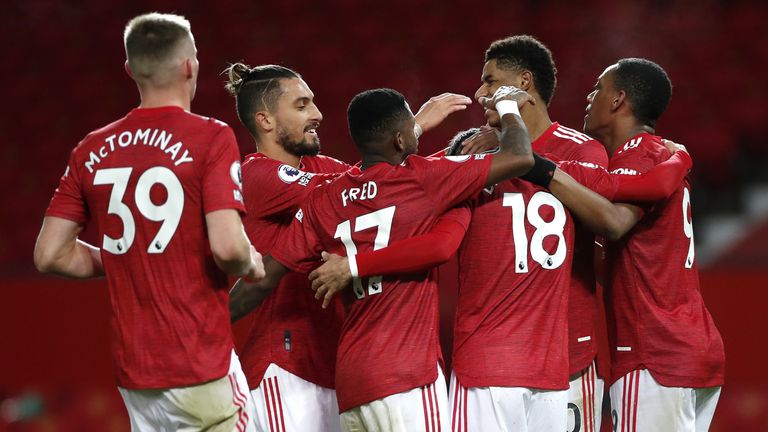 Manchester United moved third in the Premier League with a frenzied 6-2 victory over Leeds after an exhilarating 90 minutes that resembled a basketball game at Old Trafford.

Goals were predicted between these old rivals – Gary Neville described Leeds as the “perfect opponent” for Man Utd on commentary – and the goals duly flooded in. Scott McTominay got the hosts started with barely a minute on the clock with a low, long-range effort, and the midfielder got his second within three minutes with a neat finish inside the box.

Leeds’s defence rolled out the red carpet as Bruno Fernandes lashed Man Utd three ahead through a narrow gap from 12 yards (20), and the visitors conceded four goals for the fourth time already this season as Victor Lindelof converted at the far post after Anthony Martial flicked on a corner (37).

Leeds pulled one back through Liam Cooper’s header from their own corner (42), with five goals and 18 shots in a chaotic first half, but Man Utd regained their four-goal lead as Daniel James shot through the legs of Illan Meslier (66) following a counter-attack.

Fernandes’ penalty made it 6-1 after Pascal Struijk fouled Martial (70), and the chaos continued as Stuart Dallas curled a beauty into the top right corner for 6-2 (73), sandwiched in-between several guilt-edged chances at both ends.

It somehow ended 6-2 – Man Utd in particular could have easily made double figures – with 43 shots registered between the sides, meaning Man Utd moved five points off leaders Liverpool with a game in hand. Leeds are 14th, having conceded 30 goals in 14 games.

How the NBA came to Old Trafford on Super Sunday

Ole Gunnar Solskjaer earlier said he would have to bring a balloon to pop in his players’ face so they wake up in the early stages, and rightly so, with Man Utd having gone 1-0 down in the first half in seven of their previous 10 games.

The trick clearly worked as Man Utd went ahead after just 67 seconds through McTominay, driving into the bottom right corner from 20 yards after Fernandes had squared.

It was his first Premier League goal since March, and he did not wait long for a second, taking the ball superbly in the box from Martial and slotting home left-footed with just 170 seconds on the clock.

Leeds should have halved the deficit as Patrick Bamford fluffed his lines when put through on goal by Mateusz Klich, and they were further behind as Fernandes’ shot through the crowd found the far corner after some messy defending.

The mess turned into a shambles Leeds fell asleep at a corner, allowing Martial to flick on near post for Lindelof at the back post, ghosting in ahead of Kalvin Phillips, but Leeds did pull one back through Cooper’s towering header from a Raphinha corner.

The half-time break did not stop the bedlam, and damage limitations were not on the menu for Leeds. Martial turned wide in the box when he should have scored, David de Gea made a brilliant stop from Raphinha’s close-range volley, and the game’s sixth goal came moments later.

James, who almost joined Leeds from Swansea in 2019, was released by McTominay and struck through Meslier’s body, who should have done better.

Man Utd were then awarded a penalty as Struijk clumsily leaned into Martial, and Fernandes converted into the bottom right corner with his customary hop, skip and jump.

It was a “sobering day” for Leeds, said Neville on commentary, but the enigmatic nature of Marcelo Bielsa’s side showed again as Dallas curled a superb effort into the top corner from 25 yards, as viewers wondered whether they were watching a computer game.

There could have, and should have, been more goals as Edinson Cavani was denied by Meslier, while Jack Harrison somehow struck wide as Leeds queued up at the other end.

There were four changes for Manchester United from the side who narrowly beat Sheffield United in midweek, with David de Gea restored in goal after Dean Henderson’s mistake for the hosts’ opener.

Elsewhere Paul Pogba and Nemanja Matic were both benched, with Scott McTominay and Fred coming in. Dan James also made his first Premier League start since October 25 in place of Mason Greenwood.

The game had more shots (43) than any Premier League game this season, but two questions emerged through the entertainment: can Bielsa’s Leeds really play in such an unapologetic manner until May, and are Man Utd actually title challengers?

Manchester United go to Everton in the Carabao Cup quarter-final on Wednesday night, live on Sky Sports Football at 8pm, before going to Leicester on Boxing Day at 12.30pm.