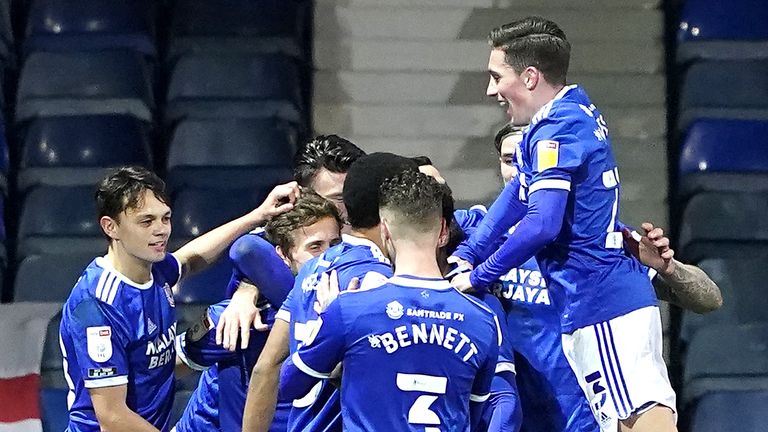 Cardiff’s resurgence under manager Mick McCarthy continued with a fourth straight win courtesy of a 2-0 success at Luton.

Second-half goals from Harry Wilson and Will Vaulks ensured the visitors claimed all three Championship points.

Cardiff had the first real chance of the contest after 13 minutes when a short corner routine was met by Vaulks on the edge of the box, Hatters keeper Simon Sluga pulling off a brilliant save low to his left.

Luton then went close after 15 minutes, Tom Lockyer’s deep cross to the far post perfect for top scorer James Collins, but he could not divert his effort on target from close range.

Lockyer then had to go off on the half-hour, replaced by Martin Cranie, with Town testing City stopper Dillon Phillips who tipped over Kiernan Dewsbury-Hall’s 20-yard free-kick.

Just before the break, Dewsbury-Hall swung another set-piece into the box where it was met by striker Danny Hylton, only for the ball to skim off his head and fall wide of the target.

City’s Wales international Kieffer Moore whistled an angled drive into the side-netting early in the second half, but the visitors then ensured all of Luton’s good first-half play counted for nothing with 53 minutes gone.

On-loan Liverpool midfielder Wilson took aim from outside of the box and hammered a drive beyond Sluga and into the corner of the net for a wonderful opener.

Sluga denied Wilson a second with a brilliant save, turning his instinctive volley from a similar distance over the bar moments later, but from the following corner, Cardiff doubled their advantage after 56 minutes.

With Luton not getting enough distance on their clearance, it fell to the unmarked Vaulks and his volley whizzed past Sluga via a slight deflection to leave the hosts with a mountain to climb.

Pelly-Ruddock Mpanzu wasted a glorious chance to make it 2-1 after 68 minutes when he was teed up by Collins but he could only slice wide of the target.

Josh Murphy tried to make it 3-0 from range, only finding the gloves of Sluga.

Harry Cornick came off the bench for Luton to almost pull one back with seven minutes left, his shot deflecting off a trailing leg and going behind.

The Bluebirds tried to extend their advantage further, defender Perry Ng testing Sluga from 20 yards after being teed up by Joel Bagan.

Tom Ince then had an effort with the last action of the contest, but his low daisycutter was too close to Phillips as City moved closer to the play-off places.

Luton’s Nathan Jones: “I’m disappointed, I thought first half we were very good, we matched them all over had the best chance through Collo, then we had to reshuffle (with an injury to Tom Lockyer), and that derailed us completely. They were able to have a knockdown without anyone around him and then he (Wilson) scores from 25 yards, so that was it really and I’m really disappointed as we switched off, we didn’t do the basics right.

“We wanted to make sure we were right at it and we were for pretty much 50 minutes, but when you switch off and a side that’s in good form and has good players then that’s what happens. We’re disappointed, but we need to be better, we need to be more clinical when we have chances and a real disappointment we had to reshuffle and then got derailed.”

Cardiff’s Mick McCarthy: “It wasn’t a particularly pretty game of free-flowing football. We didn’t start the second half well but Harry got a bit of space and punished them with a wonderful goal. There wasn’t long between the two goals and they had an uphill battle after that.

“It has been a big bounce. I have had a really good response from the squad and let’s hope it continues. I just know this league, it can turn around very quickly, so there will be nobody getting their feet off the ground.”