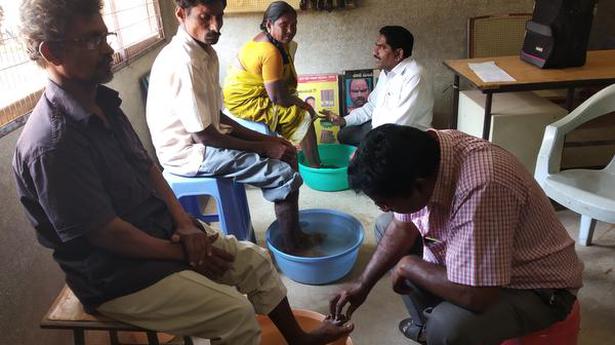 That leprosy is alive and thriving in India is evident from the fact that 60 % of the global cases are registered in our country. A case is diagnosed every 5 -6 minutes, of which 10 % are children. Explaining the surge, Prasant Kumar Naik, Chief Executive, LEPRA India says, “When the cases fell below 1 % per 10,000 population, the government of India declared the disease as ‘eliminated’, and we became complacent, which led to the disease making a comeback in the states like Tamil Nadu and Gujarat and overall, spiking the numbers.’

Initiated by French humanitarian Raoul Follereau in 1953 to coincide with Mahatma Gandhi’s death anniversary on January 30, Anti-Leprosy Week is celebrated on the last Sunday in January. At the forefront is LEPRA India, a non-governmental organisation set up in 1989 and headquartered in Secunderabad, that ensures quality health care to the patients through its workforce, which largely consists of volunteers. During the Anti-Leprosy Week, LEPRA will take up awareness at the local level, car rallies in different cities and events in coordination with other stakeholders, either physical or virtual, shares Naik.

Leprosy — renamed as Hansen’s disease after Norwegian scientist Gerthard Henrik Armuer Hansen — is a slow-growing bacterium called Mycobacterium leprae that attacks the nerves, leading to loss of sensation. Unlike the common belief, leprosy doesn’t cause disfigurement and disability, explains Naik. “Due to the loss of sensation, an injury goes unnoticed thereby causing infection and damage to the limbs and the disfigurement happens at the advanced stages of untreated disease.”

Admitting it’s called ‘poor people’s disease, Naik says the lack of a nutritious diet and living in an unhygienic environment with no proper health facilities makes the marginalised more susceptible to the disease. “The stigma and discrimination are far more damaging,” says Naik, adding, “This is a completely curable and the least infectious disease in the world but the misconception around leprosy is very high. I feel we need to include a chapter, or at least one paragraph in the school curriculum to raise awareness. The affected can lead a normal life after being administered drugs for 50 days and they need not be isolated.”

LEPRA, which primarily works towards identifying the cases faced a slight setback during the pandemic where the health workers couldn’t go out much but Naik feels because this is a disease that spreads slowly, a drastic spike may not have occurred. However, women and children suffer more when affected with the disease visa vis men. Already a disadvantaged lot, women face discrimination within the family, their community and society. With the lack of support, they find themselves looking for shelters outside their homes. For men the negative impact is much lower, says Naik. “Having said that, over the years the stigma and the discrimination has reduced but we have a long way to go. One reason why this has reduced is the rate of disfigurement related to leprosy has also reduced. There’s no reason, in a country like India where it contained polio and smallpox, why it should live with this disease,” says Naik, who feels a subject on leprosy should be brought back in medical colleges. “Most doctors in corporate hospitals cannot detect the disease, it’s the leprosy-trained health worker from his ramshackle place who can identify. There’s no dearth of resources but nobody has the knowledge,” rues Naik.

LEPRA’s two-phase work module involves more of morbidity management, reducing disability and providing life-long support and finding and arresting the diseases quickly so that it doesn’t lead to disability and spread. “A good diet can reduce disability. Leprosy is not the disease of the bones but the nerves, hence we need specialised physiotherapists. Reconstructive surgery is another element in the entire process of treatment. If somebody has been detected late and starts losing function of their limbs, they need reconstructive surgery. Sivananda Rehabilitation Home in Kukatpally is the biggest facility in India that takes up RCS free of cost for leprosy patients,” adds Naik

A former Mining Engineer, Naik has been a successful entrepreneur before “stumbling on the NGOs” as he puts it. “I worked 20 years overseas with various NGOs and came across LEPRA. Just like others, I too had many misconceptions about leprosy. When I got to understand it better. I felt this is my giving back to society moment. When I see 13 -14-year olds, who have the disease, my determination to make a difference in their lives gets stronger.”