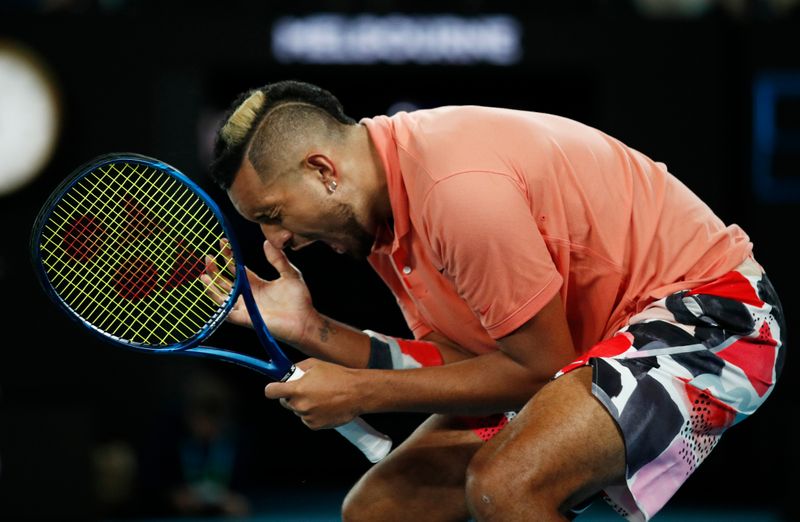 (Reuters) – Nick Kyrgios was warned for bad language and docked a point for unsportsmanlike conduct after the Australian threw his racquet into the stands during Friday’s 6-3 6-4 defeat by Borna Coric in the Murray River Open at Melbourne Park.

Kyrgios’ problems began early on Friday as he struggled with a left knee issue and needed treatment midway through the match at the Australian Open warm-up event.

“I can’t serve without pain. When I land it feels unstable,” media quoted Kyrgios as telling a trainer between sets.

The 25-year-old, playing his first tournament in nearly a year due to the COVID-19 pandemic, carried on and was warned by the chair umpire for swearing at 4-4 in the second set.

After his serve was broken, he smashed his racquet and threw it into the empty stands.

On Wednesday, Kyrgios had needed assurances from a tournament supervisor that he would not be fined by the ATP for his behaviour in the last round against Harry Bourchier before agreeing to play on.

With so little competitive action over the last year, Kyrgios said it was difficult to hit top gear quickly and added there was a “massive question mark” over his chances at the Australian Open, which begins on Monday.

“It’s not easy to just turn around and prepare for an event just like that. It’s not like a tap,” he told reporters. “I thought I did everything I could this week, won a couple of matches, had a lot of court time and practised every day.

Former Australian Open champion Stan Wawrinka was made to work hard for a win by Alex Bolt before prevailing 6-4 4-6 7-6(5).

The Swiss top seed then pulled out of his quarter-final match against Jeremy Chardy later in the day due to fatigue.

All quarter-final matches at the event were scheduled for Friday after action was suspended a day earlier when more than 500 players and officials were tested for COVID-19 after a quarantine hotel worker in Melbourne contracted the virus.

The N.F.L. had more than 700 coronavirus positives, but Seattle’s Seahawks had none.