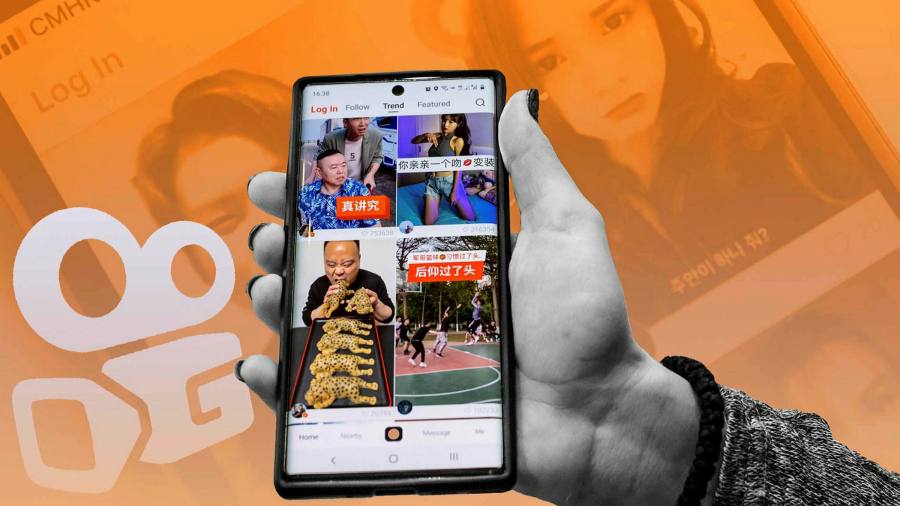 He posts these short clips to an app called Kuaishou, the biggest rival in China to ByteDance, which owns TikTok and its Chinese sister app Douyin.

Mr Gu’s charms have won him 74,000 fans, and many of these have now started to buy his preserved pork cuts. “At first I was just sharing . . . soon people started to ask me if I can sell them the food I showed in the videos,” explained the 26-year-old, who now earns roughly Rmb20,000 ($3,100) each month, twice what his fellow villagers in central China’s Hubei province earn in a year.

Analysts believe Mr Gu’s rising fortunes reflect Kuaishou’s wider potential. More than 262m Chinese check the app an average of 10 times a day, and Kuaishou, which is set for a splashy initial public offering in Hong Kong this week, is increasingly persuading those users to buy products from its online stars.

The app, which is likely to hit a valuation of over $60bn at its IPO, got its start about a decade ago when investor Fisher Zhang discovered a paralysingly shy entrepreneur named Cheng Yixiao.

Mr Cheng was building programs by himself in his Beijing apartment for people to make GIFs, small animated images, on their smartphones. “He had no motivation to make money at that moment, he was doing it out of passion,” said Mr Zhang. “We wrote him the first check.”

GIF Kuaishou, as it was first called, soon pivoted to seven-second video clips as smartphones grew more powerful and network connections became faster. But the app was a chaotic jumble of amateurish clips, mostly selfies or home videos. “Money was running out and user growth was stuck,” said Mr Zhang.

The team solved the problem by recruiting Su Hua, a former Google engineer, who built an algorithm to analyse user behaviour and push personalised content to viewers. “Within one year, the company’s user numbers went up 100 times,” said Mr Zhang.

Today Mr Cheng leads product, Mr Su is the chief executive and Mr Zhang is a director. His VC firm 5Y Capital holds a 16.7 per cent pre-IPO stake in the company.

To make money Kuaishou embraced livestreaming, where hosts entertain viewers for hours in real time, and hope to earn money by people showering them with small gifts, such as a virtual beer sticker (Rmb1.5) or golden dragons (Rmb1,400).

These stickers flash across the screen of the app, showing a fan’s appreciation, while hosts interact and respond to comments. Sales of these virtual gifts, from which Kuaishou takes roughly a 45 per cent cut, represented 95 per cent of the app’s revenues in 2017.

But the share fell to 62 per cent in the nine months to the end of September, and only grew by 10 per cent year-on-year in the period. Analysts said viewers were feeling the pinch because of the coronavirus pandemic.

In response, Kuaishou has dialled up its adverts, with sales growing by 213 per cent on-year in the period, powering a total revenue increase of 49 per cent to Rmb41bn.

Mr Zhang said the company would continue to grow its ad business, noting it was following in the footsteps of tech giant Tencent which has slowly increased the ad load in its hugely popular social media platform WeChat. Ads on social platforms contributed Rmb18bn in the third quarter for Tencent, or 14 per cent of total revenue. Tencent holds a 22 per cent stake in Kuaishou.

A $60bn market capitalisation would leave Kuaishou worth roughly one-third of its rival ByteDance, which created TikTok, the first genuinely successful global app to come out of China.

Even though Kuaishou pioneered the short video format, in some ways, Douyin, the Chinese version of TikTok, is far ahead. It generates more than three times the advertising revenue per user hour of Kuaishou, according to estimates from analysts at Bernstein, for example.

Lillian Li, author of the Chinese Characteristics newsletter, says Kuaishou prioritises engagement between users and creators, which can create friction for viewers, whereas users of Douyin passively flip through an endless stream of viral videos.

But fostering closer ties between users and creators on the platform may pay off in other ways, Ms Li suggested. “You can take them [the fans] further down the monetisation funnel, so not just ads but tipping or buying on your recommendations,” she said.

Kuaishou is looking to capitalise on those recommendations from streamers and says it sold Rmb333bn worth of goods through its app in the 11 months to November 30. Analysts at Avic Securities estimated Douyin registered Rmb200bn in livestreaming orders last year, while market leader Alibaba took Rmb500bn.

For Mr Gu, the butcher-cum-creator, sales are about equal on Douyin and Kuaishou even though he has six times the fan count on Douyin. “People on Kuaishou are more down to earth,” he said.

Making money from livestreaming ecommerce remains in early stages for Kuaishou. The category in its account that holds this unit, and other growing businesses, made Rmb2bn in the nine months to September 30, roughly 5 per cent of total revenue.

The rivalry between the two short video giants is fierce. They have traded lawsuits alleging various malpractices, and this month, when Douyin announced it would give away Rmb2bn in gifts for the Chinese new year, Kuaishou jumped in a couple of days later with a pledge of Rmb2.1bn.

Ms Li notes the two apps are converging to some degree as they replicate one another’s best features.

A hiccup in its global ambitions

Kuaishou’s rivalry with ByteDance led it to create an ill-fated international competitor to TikTok last year.

Zynn briefly topped Android and iPhone app download charts in the US last year after promising cash payments to users for signing up and watching videos. But it was quickly undone by allegations from TikTok stars that their videos were being posted on to Zynn without their permission.

Google and Apple pulled the app, eventually reinstating it after changes were made. Kuaishou’s 867-page prospectus does not mention Zynn but notes that “one of our international apps was temporarily removed from certain app stores”. It has also faced problems in India where four of its apps were banned last year, along with more than 200 other Chinese apps.

The international push, along with the launch of Kuaishou Express, a new app that mimics Douyin more closely, helped to send its sales and marketing fees up 256 per cent in the first nine months of last year, swinging the company to a Rmb9bn operating loss.

Mr Zhang said internationalisation remained in the company’s long term plans. “Chinese companies have competitive advantages, they can go beyond China,” he said, noting TikTok’s success was a sign of what is possible.

But there are further challenges for Kuaishou at home as regulators take aim at both the content in livestreams and the safety of products being sold.

Meanwhile, China’s market regulator is taking aim at the sales of food over livestreams that is not up to safety standards, which could potentially affect not only Mr Gu, but hundreds of thousands of other farmers selling their homemade goods on the app.

Mr Gu said he was fully licensed and not worried about new regulation. “My product is safe,” he said.