Says GDP i.e gas, diesel and petrol prices have gone up and not Gross Domestic Product

Hyderabad: In a hard-hitting attack laced with wit and sarcasm against the BJP government at the Centre, TRS working president and MAUD Minister K T Rama Rao said on Wednesday that he was in agreement with the Union government that the GDP in the country had gone up. “Only that the GDP I am referring to is not the Gross Domestic Product but gas, diesel and petrol whose prices have shot up,” he said.

Continuing in the same vein, Rama Rao pointed out to Prime Minister Narendra Modi’s promise to deposit Rs.15 lakh in every citizen’s bank account long ago that was yet to be delivered. “I have not received the Rs 15 lakh but yes, I got 15 lakh abuses from BJP on my Twitter handle,” he said.

Stating that the ground realities were different from what was being projected, he said the Prime Minister had also assured creation of two crore jobs a year which works out to 14 crore jobs in the last seven years. “All these promises are yet to be fulfilled,” he said, adding that both Congress and BJP do not have any moral right to seek votes in the two graduate MLC elections in the State.

Addressing the media at Telangana Bhavan, the TRS headquarters here, Rama Rao urged the Congress leaders to refrain from mudslinging on the TRS government and the BJP leaders to come up with their achievements and contribution for the State’s development before seeking votes.

Taking a dig at BJP MLC N Ramachandra Rao, the TRS working president said merely posing questions on issues does not serve any purpose. “There has to be a committed effort to address the long-pending demands of the State,” he said.

The Central government had announced 157 medical colleges but not a single college was allocated to Telangana State, he said. Despite BJP being in power at the Centre, the State BJP leaders could not get new projects or funds for existing ones, he said.

Stating that the TRS candidate for Mahabubnagar-Rangareddy-Hyderabad Graduates constituency Surabhi Vani Devi had all the qualifications to contest the elections, the TRS working president said: “She is humble, polite and service oriented. Even when PV Narasimha Rao was the Prime Minister, she never tried to misuse the power. I appeal to the graduates in both the constituencies to think wisely and elect TRS candidates.”

Vani Devi, who was also present, said she was associated with the education field for the past 35 years and had set up several institutions. “I am well versed with the issues of graduates and I will take up the issues with the government and get them addressed,” she said.

The TRS government filled 1.32 lakh job vacancies in the past six years, and Home, Panchayat Raj and Rural Development and School Education lead the chart in completion of selections under direct recruitment. The process of recruitment is for the period June 2, 2014 to December 16, 2020.

The Home Department tops the list having completed filling of 32,143 vacancies. The Panchayat Raj and Rural Development department and School Education department follow with selection of candidates for 10,763 and 8,443 vacancies respectively.

If completion of selecting candidates for vacancies is considered a parameter in the overall recruitment by different departments, then Singareni Collieries Company Limited stands first with selection of 12,500 candidates for as many vacancies.

In the electricity department, TSGENCO, TSNPDCL, TSSPDCL, TS TRANSCO were permitted to take up direct recruitment for 15,729 vacancies. Of these, notifications were issued for 11,494 jobs and selection has been completed for 11,278 vacancies. 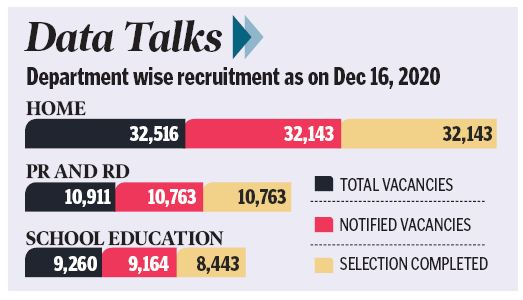 Ready for debate with KTR: Sravan

AICC National spokesperson Sravan Dasoju said he was prepared for an open debate with TRS working president KT Rama Rao on filling of about 1.32 lakh vacancies in Telangana State.

“You must come with your team to Telangana Martyrs Memorial at Gun Park at 12 noon on Friday with facts of recruitment numbers and current vacancies available,” he challenged Rama Rao, addressing mediapersons at Gandhi Bhavan here on Wednesday.

Criticising Rama Rao for ignoring the aspirations of millions of Telangana agitators, he asked the TRS working president to accept his challenge.