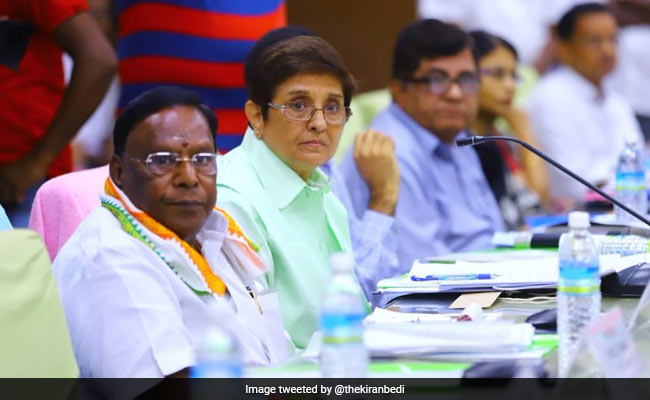 Puducherry Crisis: Kiran Bedi was removed as the Lieutenant Governor of Puducherry.

Kiran Bedi’s sacking as Lieutenant Governor of Puducherry last evening, with the state government on the brink, surprised many but top sources say the decision was not as abrupt as it seems.

For four-and-a-half years, Chief Minister V Narayanasamy campaigned for Kiran Bedi’s removal but when it did happen, it was at a time his government looked shaky after four resignations.

The reason is linked to the assembly polls due by May.

Till late evening, Kiran Bedi was reviewing the COVID-19 vaccination drive in Puducherry and issuing directions for more policemen and sanitation workers in the frontline worker category.

Sources in the BJP say with this move just before the Puducherry election, the Congress has been robbed of its single biggest election issue.

The Congress accuses Kiran Bedi of blocking every move of its government and putting up hurdles in its way. Just last week, Mr Narayanasamy went to Delhi with Malladi Krishna Rao to request President Ram Nath Kovind to remove her as Lieutenant Governor.

Malladi Krishna Rao is among the four Congress MLAs who have resigned in the last few weeks, throwing the government’s majority in question. Two others, A Namassivayam and E.Theeppainjan, joined the BJP. Mr Rao and John Kumar — who quit yesterday — are widely tipped to do so too.

But sources say most of the Congress leaders who quit had the same views on the celebrated former IPS officer.

The BJP was also aware that its own ally AINRC was not happy with Ms Bedi, 71.

Instead of just a transfer, she was removed as a strong message to the people of Puducherry that the BJP government at the centre did not favour her either. Telangana Governor Tamilisai Soundararajan has been asked to take over functions of the Lieutenant Governor for now.

Sources also pointed at talk of federal rule if the Congress government fell short of a majority. In that scenario, contesting the upcoming polls with Kiran Bedi at the helm would not be ideal, BJP leaders assessed according to sources. The controversies and a Congress campaign focusing on her would harm the BJP in the polls, the sources said.

The BJP’s moves in Puducherry make it clear that the party expects more from the Union Territory where it has been a bit player so far.

This time, the BJP has tasked two senior leaders with managing the Puducherry polls — Arjun Meghwal and Rajiv Chandrashekhar. With Congress’s regional heavyweights coming on board, the BJP has set in motion what its rivals call the “Operation Kamala” based on defections from other parties.