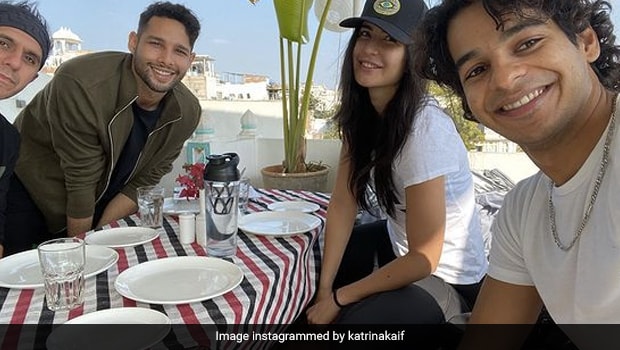 Ishaan Khatter, Katrina Kaif and Siddhant Chaturvedi will be seen together in ‘Phone Bhoot’

Katrina Kaif, Ishaan Khatter and Siddhant Chaturvedi kick started the shooting of ‘Phone Bhoot’ In Udaipur. The quirky comedy is being produced by Farhan Akhtar and Riteish Sidhwani. Fans are excited about the film ever since the trio did a photoshoot together last year. Interestingly, Ishaan also shot his debut movie ‘Dhadak’ in Udaipur, the actor posted an Instagram story saying that he was quite excited to go back to the city. Ishaan Khatter and Siddhant Chaturvedi also seem to have gotten along like a house on fire. They are both working out together in Udaipur amid the picturesque locales. The team of ‘Bhoot Police’ caught up for lunch and snacks at Grasswood Cafe, a popular lakeside Udaipur eatery on Thursday. Both Katrina and Siddhant also posted pictures from the cafe.

On Friday, Ishaan Khatter posted a fresh set of pictures from the Grasswood Cafe. All three actors posed with Ishaan’s affogato coffee, and we cannot decide if it is the view, the actors or the affogato that looks more stunning in these pictures. Ishaan punningly wrote in his caption, “We posed with my coffee so affogato drink it”,

(Also Read: Ishaan Khatter Cracks The Formula For A Good ‘Cup Of Joe’ With Just Coffee, Water And Spoon)

Ishaan Khatter was last seen in the critically acclaimed drama ‘A Suitable Boy’. Directed by Mira Nair, ‘A Suitable Boy’ became one of 2020’s most talked about TV series. The adaptation of Vikram Seth’s novel of the same name also starred many other legendary actors like Tabu, Ram Kapoor, Vinay Raaz and Ranvir Shorey.

About Sushmita SenguptaSharing a strong penchant for food, Sushmita loves all things good, cheesy and greasy. Her other favourite pastime activities other than discussing food includes, reading, watching movies and binge-watching TV shows.

LeBron James air-balled a free throw, and then Twitter tried to dunk on him