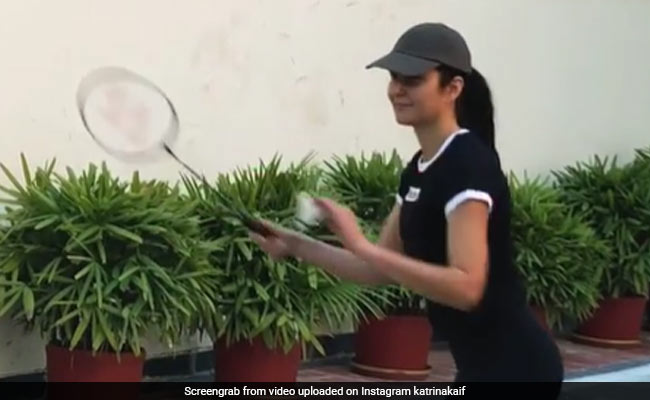 Katrina Kaif in a still from the video. (Image courtesy: katrinakaif)

Katrina Kaif, Siddhant Chaturvedi and Ishaan Khatter sure know how to have fun while shooting for their new film Phone Bhoot. On Saturday, the actress gave a glimpse of how the trio engage themselves in fun activities in-between the shots. She shared a video of herself and Siddhant playing “a very professional looking game of badminton with a little dancing mixed in” on the sets of the film. The clip shows Ishaan Khatter patiently waiting for his chance to play but as assured by Katrina in her caption, he “did get to play,” maybe later. The actress, in her post, shared that while it appears that she “had the upper hand” in the game but it wasn’t the case, Siddhant was better than her.

She wrote: “A very professional looking game of badminton with a little dancing mixed in. I promise Ishaan Khatter did get to play. Siddhant Chaturvedi graciously let it appear that I had the upper hand which definitely was not the case.”

Katrina Kaif, Siddhant Chaturvedi and Ishaan Khatter are currently filming Phone Bhoot in Udaipur. The trio have been sharing pictures from the set on social media. Just a day ago, Katrina Kaif shared this photo:

And here’s a video of Ishaan Khatter and Siddhant Chaturvedi doing “serious training”:

Katrina, Siddhant and Ishaan play ghostbusters in the horror-comedy, which is expected to release this year.

The film is being directed by Gurmmeet Singh and produced by Farhan Akhtar and Ritesh Sidhwani under their banner Excel Entertainment.