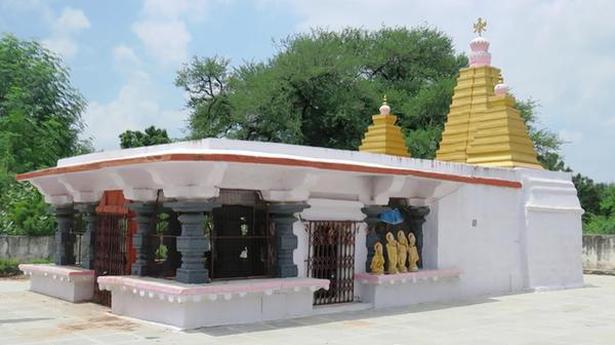 A 13th century Sri Pattabhi Sita Rama Swamy temple founded by Rani Rudrama Devi of the Kakatiya dynasty has been revered as the Sri Santhana Venugopala Swamy temple by the people of Brahmana Kothapalli village in Nellikuduru mandal of Mahabubabad district.

Historians credit this as at least 300 years older than the Sri Sita Ramachandra Swamy temple at Bhadrachalam. What is surprising is the lack of ‘Sthala Purana’, which should have given it the continuity of legacy as Pattabhi Sita Rama, said D. Kanna Babu, former Superintending Archaeologist, Temple Survey Project (Southern Region) Archaeological Survey of India (ASI), Chennai.

There is enough recorded evidence about the glory of this temple since Kakatiya rule, he added. It also has a shrine for Lord Siva, and it is quite interesting to note that being an ardent devotee of Lord Siva, Rudrama Devi constructed a temple dedicated to Sri Rama, Mr. Babu said.

“It proves her devotion to Lord Rama, the unique administrator. Perhaps she might have taken inspiration from him while sojourning the kingdom,” he noted.

Narrating the architectural significance of the shrine, he said that it stood on a well-built jagati platform — now covered under modern flooring.

There is a common pillared mukha mandapa hall and entry is through a highly carved doorway at the east. The doorway is very distinctive and rarest of its kind for it has the dancing image of Anjaneya with folded hands, and is flanked by two dancing vanaras playing musical instruments on its decorated lintel.

“In addition, two shrine models are carved on either side. There is a common vestibule positioned before the central shrine while the rest of the two have only sanctums,” Mr. Babu said.

After the vestibule, there are three sanctum sanctorums. The central cellar enshrines Sri Santhana Venugopala Swamy in a standing position holding a flute in his hand, with Rukmini and Satyabhama on either side.

Again the dancing Aanjaneya depicted on sanctum’s doorway indicates that the presiding deity is Sri Rama. The southern shrine enshrines the seated image of Sri Pattabhi Ramachandra Swamy with Goddess Sita on his lap the third shrine sanctified with the Goddess.

“It seems with the passage of time, the original theme of sanctified gods as positioned by the temple’s founder Rudrama Devi has been changed by local devotees as per their worshipping traditions,” Mr. Babu observed.

The pillars of the temple are of a decorative variety and carry plain capitals as well as brackets akin to the Kakatiya temples at Hanamkonda and Warangal.

Mr. Babu further elucidated that while studying the architectural features of the mukha mandapa, he found an inscription of the Kakatiya period on a pillar in Telugu script and deciphered it.

“This is surely a very rare shrine in both the Telugu States and deserves to be promoted among tourists,” Mr. Babu added.

Budget FY22 lays the foundation for future growth with reforms