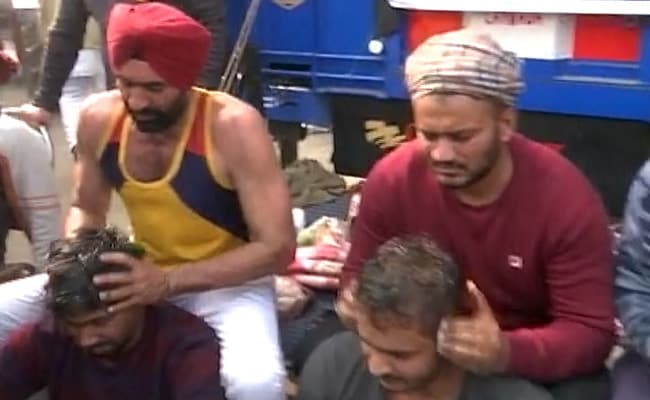 Farmers have been protesting along Delhi’s borders to demand repeal of centre’s 3 farm laws.

After foot massagers and washing machines, farmers protesting in Delhi’s biting cold are now being treated to traditional head massage, or “maalish”, by Kabaddi players who want to “destress” them.

Amid continued protests for repeal of centre’s three agricultural laws at Delhi’s borders, young Kabaddi players started a head massage service on Monday from 10 AM to 5 PM saying protesters needed relief from cold and walking all day.

“We want to destress the protesters. We want to give them strength to carry on and tell the government that we have not wasted our life doing drugs as we are being accused of. We are not extremists, Maoists or Khalistanis,” Komal Deep Singh Cheema, an international Kabaddi player, told NDTV at the Singhu Border – one of the several entry points to the national capital where lakhs of farmers have been camping since November 26 as several round of talks with the government failed to end the deadlock.

“More than the farmers, the Prime Minister needs this massage to understand who prop up his government,” said a Delhi resident, who has been volunteering at the protest site for the last 27 days.

Many young volunteers are also massaging legs of old farmers. “These youngsters are doing a great job. It (leg rub) relaxes me after walking all day,” said a 75-year-old grower from Haryana.

This service is among the many facilities, including weather-proof tents and roti-making machines, being provided by members of the civil society and social organisations for farmers who have said they won’t budge till the government accepts their demands.

Farmers want repeal of the three laws they say will eventually lead to discontinuation of the government’s mandi system, minimum assured price (MSP) for their produce, and leave them vulnerable to exploitation by the private sector.

The fears have been dismissed by the central government, which has been projecting figures of increased procurement and better MSP to back the laws, saying it would change the laws to farmers’ satisfaction but not scrap them.

“The government wants to talk to farmers with an open heart. Give us a date; we are ready to discuss all issues. Our intent is clear. We are explaining the laws’ benefits; we hope the farmers will understand. If farmers have any suggestions over MSP, we are willing to discuss,” Mr Tomar said.

“We hope to reach an agreement to end the protests,” Mr Tomar said as the last scheduled talks on December 9 failed to break the deadlock.

On Sunday, the centre invited 40 union leaders for a fresh round of talks on a day of their choosing.

Thousands of farmers from Maharashtra have also left for Delhi to join the protests, which the BJP-led centre claims is mainly dominated by those from Punjab, Haryana and farmers from states ruled by opposition parties.

At least 20 farmers have died during the ongoing protest, one attempted to end his life on Monday and a Sikh priest died by suicide last week to highlight their plight.