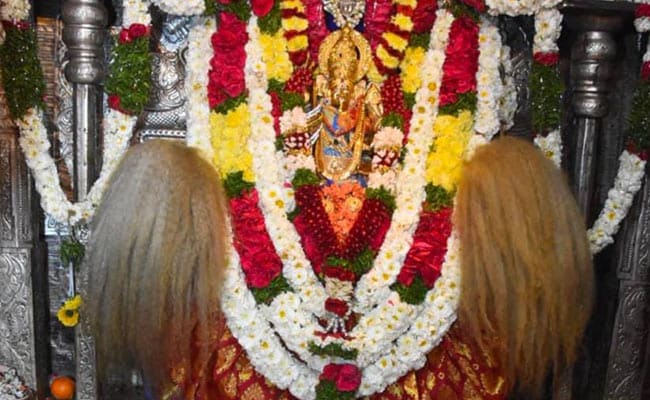 The gold saree offering was made by KCR’s daughter K Kavitha and a Telangana minister.

An offering of a saree made of gold, weighing over 2 kg, for goddess Yellamma at a temple in Hyderabad is among the many programmes planned for Telangana Chief Minister K Chandrashekar Rao’s birthday. Mr Rao turns 68 today.

The gold saree, said to be 2.5 kg, will be offered by his daughter K Kavitha, who is a Member of Legislative Council, along with Animal Husbandry Minister Talasani Srinivas Yadav.

The minister, like most of his cabinet colleagues, has had a packed schedule, to convey his admiration for his party leader.

The mega birthday celebration is seen as an attempt to establish the position of Mr Rao, or KCR, as what his party sees, as the tallest leader in Telangana.

At 8:45 am, Mr Yadav offered prayers at a gurudwara in Hyderabad’s Ameerpet.

At 9 am, he prayed at the Balkampet temple where he made the offering of the gold saree.

At 9:45 am, Mr Yadav prayed at Hyderabad’s Clock Tower church.

About 30 minutes later, he was at the Nampally dargah, offering a chadar.

From 10:30 am, he participated in celebrations at Jalavihar on Necklace Road where a 3D documentary on the life and times of KCR was aired. This was followed by a cake-cutting ceremony in which the chairperson of the legislative council, the Telangana Assembly Speaker and several state ministers took part.

Apart from this, the Chief Minister nephew, Santosh Kumar, who is a Rajya Sabha member,  organised a drive for planting one crore trees, roping in Telugu actors, Bollywood celebritirs and VIPs from politics and business.

In neighbouring Andhra Pradesh’s East Godavari district, a nursery has manicured its flowering plants to create an image of KCR, conveying birthday wishes.

Today is @TelanganaCMO#KCR‘s birthday; here’s a nursery/ garden in #EastGodavari#AndhraPradesh that’s conveying birthday wishes with the colours of flowers and plants @ndtv@ndtvindiapic.twitter.com/wvt7aA0lku

The large-scale birthday celebrations for KCR also come at a time when there is talk of his son, KT Rama Rao, or KTR, replacing him As Chief Minister. Earlier this month, the senior Rao had dismissed this as rumour and said he would be Chief Minister for the next 10 years and more.