Jaguar Land Rover will all-but ditch the internal combustion engine within 15 years as new chief executive Thierry Bolloré unveiled a radical plan to steer one of the UK’s best-known carmakers into the electric era.

In the biggest overhaul of Britain’s largest automotive business in a decade, the company will from 2026 phase out the diesel technology that once dominated its fleet and by 2025 shift its historic Jaguar nameplate famed for noisy sports cars to an electric-only brand.

The move by Bolloré, the former head of Renault who joined JLR in September, comes as rivals around the world step up their efforts to carve out a profitable future as electric vehicles become more mainstream.

Ian Henry, head of AutoAnalysis, said the strategy brings welcome “coherence and efficiency” to a company which, like its rivals, has been hit hard by the pandemic. JLR is “not necessarily late” in crafting an all-electric strategy, he added. “Everybody is still putting strategies together for the electric transition.”

The company expects to have “almost zero” sales of internal combustion engine models by 2036, Bolloré said, estimating that 60 per cent of its sales would be zero emission vehicles by 2030.

The plan will also see JLR wind down carmaking at its Castle Bromwich plant in the UK, but will keep the site open by shifting production of non-car manufacturing to the West Midlands facility.


JLR’s pre-tax profit for the final three months of 2020, almost 40 per cent higher than the same period a year earlier

Employing more than 2,000 people, the plant had been widely expected to shut in the long-awaited overhaul. Instead, the production of the Jaguar models will be wound down in coming years.

Bolloré pledged on Monday to keep all “core plants” open under the new strategy, but to “repurpose and reorganise” its jumbled network that includes facilities in Slovakia, India, China, Brazil and the UK.

Although the strategy, which will also streamline a bloated line-up of models and aim to propel the business to double-digit earnings margins, was welcomed by analysts, the decision to stop making cars at the Castle Bromwich is the latest in a series of similar decisions by carmaking groups. Honda said in 2019 it would shut its Swindon plant this year.

The move by JLR, almost 20 years after Ford stopped car production at its Dagenham plant to focus on engine making, comes after UK car output last year fell to its lowest level since 1984 with factories and showrooms shut down by the pandemic.

JLR’s own finances have been boosted by the surprise recovery of the Chinese market and the rollout of its new Land Rover Defender, which helped the company post a £439m pre-tax profit for the final three months of 2020, almost 40 per cent higher than the same period a year earlier.

But falling sales over recent years owing to declining demand for diesel have resulted in the underutilisation of its UK manufacturing sites, which include Solihull in the Midlands, Halewood on Merseyside and Castle Bromwich. 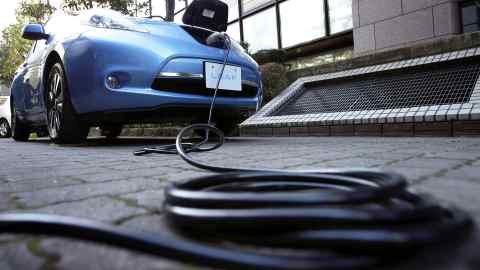 As part of the overhaul, JLR said it will spend £2.5bn a year developing electric and connectivity technology for its cars, with each model in its line-up offering a battery version by the end of the decade. The first fully electric Land Rover model would be released in 2024, it added.

JLR has been slow to roll out electric and hybrid vehicles and been overly reliant on diesel technology to lower its CO2 emissions. The group paid a £35m fine after missing EU emissions targets last year and £28m in the US and China to meet fuel-efficiency goals.

It will in future focus on hydrogen fuel-cell systems as the “logical next step” for its largest models.

The luxury carmaker will also share more technology with its parent company Tata Motors in an effort to cut development costs.

The group also axed earlier plans for a battery version of its flagship Jaguar XJ saloon car, which was to be built at its Castle Bromwich site and had been feted as the saviour of the plant when announced by previous management in 2019.

Cancelling plans for the model was expected to lead to a write-off of at least £300m, according to two people previously involved in the project. Instead, JLR will make its main Solihull plant the centre of its electric vehicle efforts and the revival of the Jaguar brand.

JLR’s British plants made 243,000 cars last year across the three sites, fewer than Nissan produced from its single Sunderland facility.