Three weeks after the world’s largest Covid-19 vaccination programme kicked off in India, a major section of the population is hesitant to take the jab. A recent survey by LocalCircles, however, showed that vaccine hesitancy in India has dropped by 16 per cent within a month and now, 42 per cent Indians are willing to get inoculated. This number is expected to go up to 65 per cent if senior government leaders go for the shot themselves.


What is more interesting is that 39 per cent of hesitant citizens are willing to take the Covid-19 jab if senior leaders in Central and State government (Members of Parliament, and Members of Legislative Assembly) lead by example.

Political leaders have taken the jab in many countries – for example Joe Biden and Kamala Harris inoculated themselves with Moderna vaccine shots as President-elect and Vice-President-elect. In UK too, Queen Elizabeth II and Prime Minister Boris Johnson have reportedly taken the jab.


In India, Opposition parties along with healthcare professionals have urged the government, including Prime Minister Narendra Modi and top leaders, to take either of the Covishield or Covaxin doses, which could help in drastically reducing trust and fear issues amongst citizens. 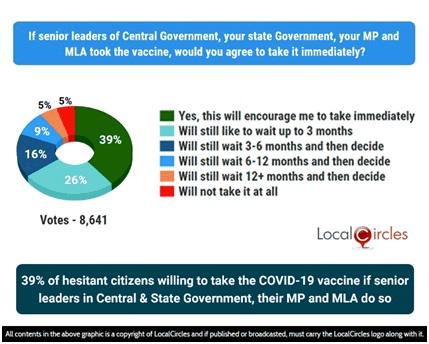 LocalCircles, a community social media platform, said in their survey 39 per cent people said that if senior leaders of the Central and state governments along with MPs and MLAs took the jab, the move will encourage them to take the vaccine immediately.


India is close to inoculating 5 million frontline health workers with vaccines, while less than 2000 adverse events have been reported.


Since October 2020, LocalCircles has been collecting responses from citizens to know their approach on taking the Covid-19 vaccine, aimed to understand if the percentage of reluctance or hesitancy has increased, reduced or remains unchanged along with reasons for hesitancy. The last LocalCircles vaccine hesitancy survey conducted on January 25, 2021, indicated that 60 per cent of citizens were still hesitant to take COVID-19 vaccine immediately. These majority of respondents in that survey maintained that they were largely worried about side effects, with a small percentage not sure about its efficacy.


“This week, the percentage of hesitant citizens stands at 58 per cent. A month ago, i.e. in early January, the percentage of citizens hesitant to take the vaccine was 69 per cent which dropped to 62 per cent at the end of the second week when vaccination began and to 60 per cent in the third week of January 2021 to 58 per cent this week. This means that vaccine hesitancy amongst citizens has dropped by 16 per cent within a month’s time,” LocalCircles said.


Even a survey amongst healthcare professionals in India released in coordination with LocalCircles had earlier indicated that 55 per cent will either defer the vaccination or haven’t yet decided what to do.