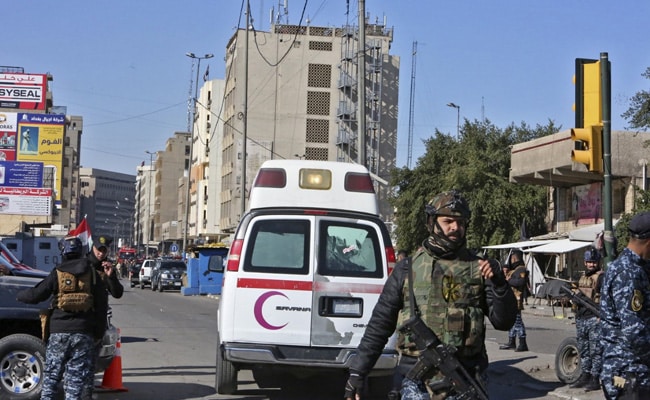 A bombing killed and injured several people at a market in Baghdad, Irag, in January. (File)

Expressing serious concerns on the terrorist attacks that took place last month in Baghdad, Iraq, India on Tuesday said that the United Nations Security Council (UNSC) should focus on eliminating every threat posed by the Islamic State of Iraq and the Levant (ISIL) and other terror groups in Iraq and elsewhere in the world.

Speaking at the UNSC, TS Tirumurti, permanent representative of India to the UN, said that the recent terrorist attacks are a “stark reminder” that the ISIL continues to pose a significant challenge to peace and stability in Iraq and the region.

He expressed solidarity with the Iraq government and its citizens, stating that the attacks are a stark reminder that ISIL continues to pose a significant challenge to peace and stability in Iraq and the region.

Mr Tirumurti urged the international community to continue their support for the Iraqi Security Forces and the government to address the menace of terrorism and provide an environment free of terror and fear.

“The report of the Analytical Support and Sanctions Monitoring Team of the 1267 Committee had mentioned in its report that the threat posed by ISIL to international peace and security is on the rise again and that majority of the active 10,000 ISIL fighters in the region are in Iraq. This is deeply concerning,” he said.

He suggested that the focus of the council should be to eliminate every threat posed by ISIL and other terror groups in Iraq and elsewhere in the world. “In order to ensure effective action, a holistic approach needs to be adopted in the global fight against terrorism.”

He recalled that External Affairs Minister S Jaishankar had proposed an eight-point action plan for effectively countering terrorism at the Council’s Ministerial meeting in January.

During the UNSC meeting, India lauded Iraq’s efforts to hold parliamentary elections in October this year.

Mr Tirumurti said: “The upcoming parliamentary elections in Iraq, scheduled in October 2021, will be a valuable opportunity to strengthen the roots of democracy in the country. A transparent, free, fair and inclusive election, conducted in a violence-free environment, with high voter turnout will empower the new Government to implement reforms, improve accountability, meet the genuine aspirations of Iraqi people, especially the youth and promote inclusiveness and reconciliation.”

International assistance to the Independent High Electoral Commission of Iraq and UN observation of the electoral process would also enhance the credibility of these elections and build confidence about the integrity of the results amongst the Iraqi people, he added.

For free and fair elections in Iraq, India has agreed to support Baghdad’s request for UN observation of the upcoming elections.

“We will support any process which respects Iraq’s sovereignty, strengthens the democratic exercise, and makes it credible, and consequently acceptable to the people of Iraq. In line with our strong democratic traditions, India has contributed to the democratic and electoral processes in Iraq by training Independent High Electoral Commission officials and sending election observers,” Mr Tirumurti said.

India lauded Iraq’s progress in the preparation for the upcoming elections.

“The passage of the electoral law and allocation of funds to the Independent High Electoral Commission are significant steps in this regard. It is important that the remaining conditions for smooth elections like completion of bio-metric voter registration and agreement on the Federal Supreme Court’s membership are also fulfilled in a timely manner. We acknowledge the valuable support provided by United Nations Assistance Mission for Iraq (UNAMI) in the electoral process,” Mr Tirumurti said.

75% of those polled oppose agreement without stronger environmental commitments : worldnews