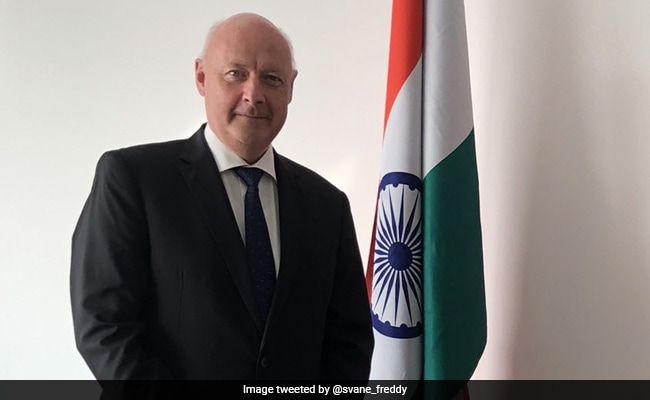 India Going To Come Out Of Pandemic As One Of The Global Winners: Danish Envoy Freddy Svane

Denmark today said India is going to come out of the coronavirus pandemic as one of the “global winners”, and it was looking forward to majorly expand bilateral cooperation in areas of clean energy, water and food processing under a green strategic partnership.

The green partnership, finalised at a virtual summit between the prime ministers of the two countries, aims to create a framework for significant expansion of cooperation in areas of renewable energy, environment, economy, climate change and science and technology.

“It is a partnership of the new age as it is really focusing on a green transition,” Mr Svane said.

The Danish ambassador said the two countries are also working on another track called “advanced plan” focusing on the expansion of cooperation with specific targets in areas of water, energy and financing of projects to be implemented under the green partnership.

He said Denmark is looking at offering its expertise to India in preserving as well as ensuring judicious use of water besides boosting cooperation in the production of offshore and onshore wind energy.

On post-COVID recovery, Denmark was confident that India was going to come out stronger from the pandemic.

“I think India is going to come out of the pandemic as one of the global winners. The number of COVID-19 cases in India has gone down drastically while in Europe, we have a spike,” Mr Svane said.

“I am pretty sure that India will be able to sustain the actual development and that will help the country in the long-run. India needs to stand on its own feet; needs to pursue its own interest,” the envoy added.

He said a strong pro-active India is in the interest of the world.

Asked whether he was confident of India’s post-COVID economic recovery, Mr Svane said he was “pretty optimistic”.

“India has already proved its capabilities and capacities. India really built not only the present by effectively handling the situation (following the pandemic), it also looked at the future. Built some fantastic systems,” he added.

He also mentioned how India reached out to several countries and supplied medicines initially, and is sending coronavirus vaccines now to help them deal with the pandemic.

“India will develop whatever happens. India has now really, I think, realised that we should not just keep ourselves for ourselves, it is not India for India but it is India for the world,” he said.

The Danish envoy said his country was confident of deeper cooperation and collaboration with India in the “green” initiative as it feels Prime Minister Narendra Modi would like to drive the country’s growth and development in a green and sustainable way.

Asked about the stalled negotiations between India and the European Union on a free trade agreement, he exuded confidence of forward movement on it.

Launched in June 2007, the FTA talks have been stalled since May 2013, when both sides failed to bridge substantial gaps on crucial issues, including data security status for the IT sector.

The ambassador also favoured having investment protection pacts between India and European countries.

“Denmark is a free trade loving nation. In order to ensure that companies doing private investments have proper kind of protection, we think it is highly needed. We would like to see progress on it. We were very happy with the last India-EU summit which added some momentum on it,” he said.

Govt may give Cairn oil field instead of paying $1.4 billion: Sources