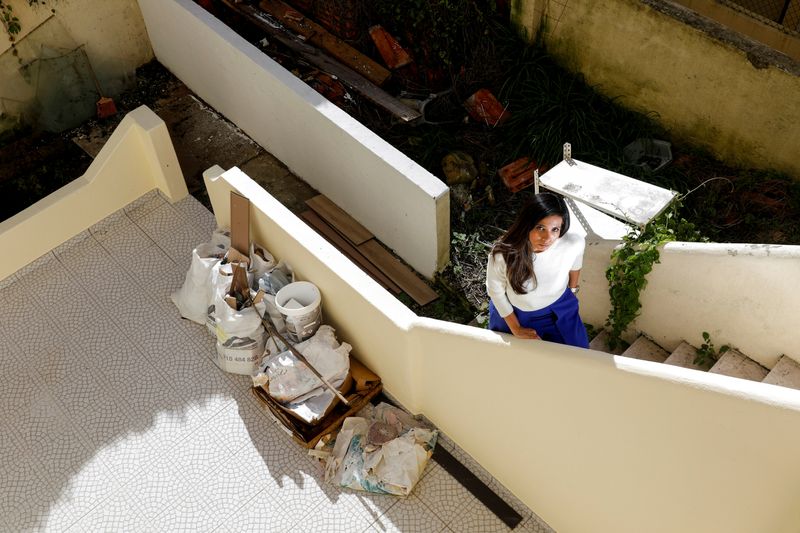 © Reuters. Giuliana Miranda poses beside the construction site in front of her apartment building

LISBON (Reuters) – The construction site outside Brazilian journalist Giuliana Miranda’s suburban Lisbon apartment didn’t bother her much – until remote working kicked in and the drilling noise drowned out her interviewees on Zoom. Soon, she moved house.

But luck was against her. Just before working from home became mandatory again last month, two of her eight neighbours in the new building began renovating their apartments. Two more have started since.

“The construction site had council permission to start at 7 a.m., and work Saturdays too. I moved because of the noise,” she said by phone. “But … now, the new building has four people renovating their apartments too!”

A new line of legislation in a decree passed on Thursday extending Portugal’s nationwide lockdown for another two weeks may finally bring peace and quiet to Miranda and others struggling to concentrate when neighbours are banging on walls and ripping up floors.

Under the decree, the government can impose limits to decibel levels within residential buildings during the working day, so as not to disturb remote workers. Currently, construction can take place 8 a.m. to 8 p.m. on weekdays, with some projects receiving a licence to work weekends.

The government did not respond to a request for more details on its plans.

Hugo Fernandes, a 44-year-old musician who said he has suffered from the noise from renovation works in the building next door for more than two years, has high hopes.

“A new rule could change things. We’ve complained to the council before, to no avail, ” Fernandes said. “It’s unbearable and, as a musician working from home, it’s just impossible.”

Still, loopholes in the legislation could leave those struggling with noise from construction work outside their building out of luck. The rule states that noise levels inside a building must be regulated – it doesn’t specify if noise stemming from the street can be stopped.

But for companies hired to do renovation work inside apartments, the legislation could pose a problem – particularly if it is open-ended, said Ricardo Gomes, head of the Portuguese Construction Company Association.

“There will be short-term damage to the sector, yes – but the real question is, how long would such rules last?” Gomes said. “COVID will end, but remote working won’t. Like everything imposed in the state of emergency, these rules need to be limited.”