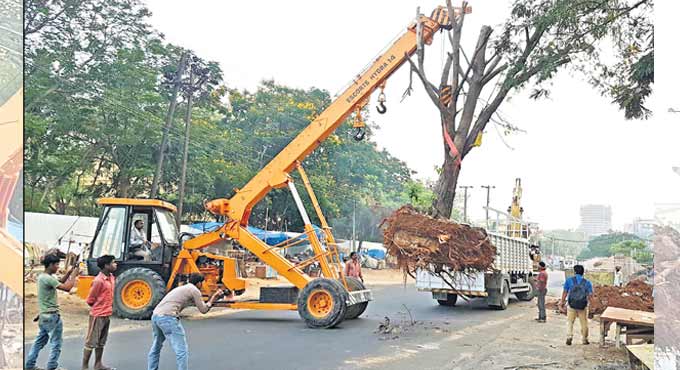 Hyderabad: As cities grow, expanding their boundaries and look at ways of tackling urban challenges like traffic congestion, trees are increasingly becoming a casualty, not just in Hyderabad, but across the world. And that is where organisations like the city-based Vata Foundation become crucially relevant.

The foundation, for the last six years, has been translocating trees that are about to fall, have fallen or were marked to be chopped down, free of cost to a safer location. The volunteer-based organisation, founded in 2015, is headed by Uday Krishna, Jyothi Konda and Sumesha Reddy, all from different professional backgrounds, but who believe in doing their bit to save the environment. In fact, during the pandemic, the organisation was able to save about 455 trees in Telangana.

Uday Krishna remembers his first translocation assignment was unplanned, yet successful. “Back in 2010, when we had to chop down 16 trees for a construction, I began thinking why we couldn’t just relocate them. Back then I didn’t have much knowledge about the field, but I didn’t want to cut down the trees for my work. So, I searched for a location where they could be planted, and with the help of an earthmover, took them there. Thirteen of the 16 trees survived the translocation,” Uday shared.

Recently, Vata Foundation has begun the trimming exercise and digging around the roots as a prelude to the gigantic task of translocating about 33 fully grown trees from the compound of the demolished Secretariat to a private land in Shamshabad. The government permitted relocation of these decades old trees rather than allowing them to be chopped off and sold as firewood.

“We have earlier worked with the government to save more than 1,000 trees from various areas under the GHMC limits. Most of them were trees affected by the Strategic Road Development Programme. We translocated those trees to government schools, graveyards, campuses, independent farms etc. Once we get the required permissions, we ask nature lovers to adopt trees. They sponsor the cost of transporting and replanting the trees,” said Uday. 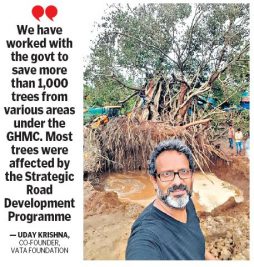 Interestingly, the foundation doesn’t charge a penny for the work, and neither does it take donations from government, individuals or MNCs. When asked about how they manage the finances, Sumesha quiped: “We have several volunteers who help us run the show.”

“Initially, we paid for the transport, logistics and labour out of our own pockets, however slowly people started coming forward to help us. Most of them have heard about Vata through word of mouth. They are our real strength. Many times people have money and resources, but no time. Other times, they have space for trees, but no money. We now have a database of our volunteers. So, we ask them to help us as per the requirement,” she added.

Vata Foundation’s work is not just limited to Hyderabad. Recently, Vata was approached by a few NGOs from Goa to help them with a fallen 90-year-old banyan tree in Arambol.

“The tree had been the spot for various socio-cultural events of the citizens for decades. And so, when it fell, the locals were heartbroken. There was no way we could take a crane to the sandy location as we usually do. We had to entirely depend on earthmovers and ropes to lift the tree. It took us four hours to accomplish the task,” Uday said.

After working on the project for two days, the foundation was finally able to re-root the tree. “People were overwhelmed. They started hugging each other,” he said.

“A wildlife corridor or green corridor is an area of habitat connecting wildlife separated by human activities. Housing developments, major highways and general urban sprawl have made it harder for the wildlife to move around freely. Hence we plan to do seed bombing between Tipeshwar and Kawal to ensure animals can move from place to place without interference. This project was supposed to take place in Monsoon 2020, but due to the pandemic, we had to delay it. However, we are working on it to happen this year positively,” said Uday.