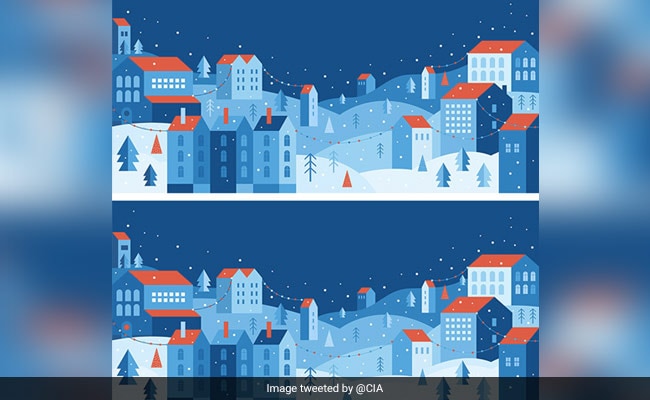 How Many Differences Can You Spot In These Pics Shared By The CIA?

How many differences can you find between these two images?

The Central Intelligence Agency of the United States recently challenged its Twitter followers to a fun puzzle. The CIA has shared brain teasers and puzzles on social media in the past as well. From questions designed to test a user’s analytical skills to their observation powers, these puzzles are always a good way to keep your little grey cells working.

This time, the CIA shared two illustrations that look the same at first glance and asked their followers to find all the differences between the two. The illustrations both feature picturesque red-roofed houses and trees against a dark sky. However, there are certain differences in both these pics and social media users have been challenged to find them all.

“You know how this works. Let us know how many differences you find,” the CIA wrote while sharing the pics on Twitter last week. Take a look:

You know how this works. Let us know how many differences you find. pic.twitter.com/Eeu4PUVu80

The tweet quickly garnered thousands of ‘likes’ and responses from people trying their hand at CIA’s challenge.

“I can neither confirm nor deny I find differences,” another quipped.

How many discrepancies were you able to spot? Check your tally against CIA’s below:

How many did you find?

If you’ve enjoyed playing along with us for #TuesdayTrivia, check out https://t.co/ZJcxdgjC5Z for more games and puzzles. pic.twitter.com/6uiwJzHhnZ

How many differences could you find? Let us know using the comments section.