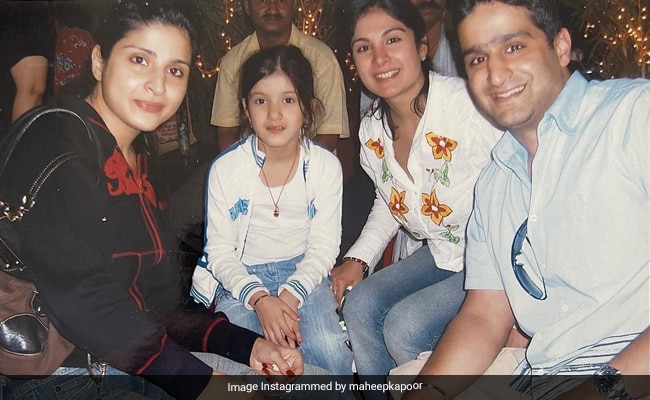 Guess The Cutie Who Grew Up To Be A Dance Diva. Right Answers Only

Maheep Kapoor is on a photo sharing spree, throwback ones. She recently Instagrammed childhood photos of herself and followed them up with yet another blast from the past, this time, with her daughter Shanaya Kapoor. Missing her brother Hartej Singh Sandhu, Maheep flipped through the pages of her family albums and spotted just the perfect throwback to sum up her feelings. What makes Maheep’s photo all the more adorable is that it features her daughter Shanaya Kapoor as a little kid. Shanaya, who is all of 21 now, must have been 5 or 6 six years when the photo was clicked. Dressed in white and denims, Shanaya can be seen posing for the cameras.

Who knew that the cutie in Maheep Kapoor’s throwback was going to be such a dance diva. Here’s what we are talking about:

Earlier, Maheep Kapoor dropped these “baby me” photos on Instagram and was showered with heart-warming comments from the likes of Malaika Arora, Karisma Kapoor, Sonali Bendre, Sussanne Khan, Bhavana Panday and others.

Sanjay Kapoor and Maheep got married in 1997 and Shanaya was born to the couple in November 1999. The couple are also parents to son Jahaan. Last month, Maheep shared this fam-jam photo from eons ago with the sweetest caption: “This is us,” she wrote with red hearts.

Maheep Kapoor was once a model and an aspiring actress. She was supposed to make her Bollywood debut the year she got married but her film got shelved. Maheep Kapoor recently featured in the Netflix series titled Fabulous Lives Of Bollywood Wives along with her close friends Bhavana Panday, Seema Khan and Neelam Kothari.

Navalny Back in Court, This Time in Defamation Case