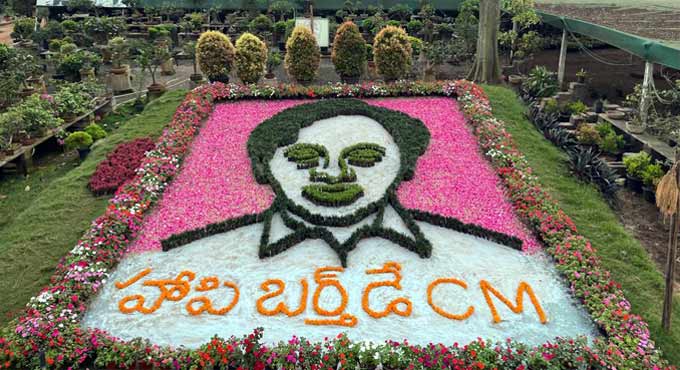 Hyderabad: TRS leaders and various organisations are making elaborate arrangements for massive celebrations across the State to mark the 67th birthday of Chief Minister and TRS president K Chandrashekhar Rao on Wednesday. While a large number of people are joining hands for Rajya Sabha MP Santosh Kumar’s ambitious initiative of ‘Koti Vriksharchana’ plantation programme, others are organising service activities like blood donation camps, distribution of fruits and serving food to the needy, among other activities, in the State.

Celebrations already began on Tuesday when Ministers and legislators participated in various service activities including blood donation camps, distribution of three-wheelers and other equipment to differently-abled persons, and also the distribution of fruits and other essential commodities to poor patients in various hospitals. Many organisations, as well as individuals, have come up with special audio and video songs, singing eulogies of Chandrashekhar Rao for creating history and achieving Telangana State.

One of the major events of the day will be Santosh Kumar’s ‘Koti Vriksharchana’ programme aimed at planting one crore saplings between 10 and 11 am on Wednesday. Elaborate arrangements have been made for the massive plantation drive being taken up to increase green cover in the State. Leading film stars including Sanjay Dutt, Ajay Devgn, Chiranjeevi, Nagarjuna, Mahesh Babu and several others, have already expressed their support to the plantation drive and appealed to people through social media platforms to plant saplings. The Green India Challenge (GIC) also announced plans to award ‘Vanamali’ title to those who plant the saplings.

Further, all Ministers, MPs, legislators, other elected representatives and TRS party leaders took it up as a challenge and are organising the plantation programmes. Several organisations including private institutions also announced their plans to participate in the plantation drive across the State. TRS NRI wing is also organising plantation drives and social service activities in 50 countries.

Animal Husbandry Minister Talasani Srinivas Yadav is planning another massive birthday celebrations at Jal Vihar where a 30-minute 3D video on the Chief Minister, highlighting his life journey, will be released by Assembly Speaker Pocharam Srinivas Reddy. The Council Chairman Gutha Sukhender Reddy will cut a 67-kg cake marking the 67th birthday of the Chief Minister.

Besides, several religious programmes including Mrutyunjaya, Navagraha and Anjaneya homams as well as Koti Kumkumarchana will be performed for the well-being of Chandrashekhar Rao and also for the welfare of the State. MLC K Kavitha will offer a gold saree weighing about 2.5 kg to the presiding deity at Balkampet Yellamma Temple. The TRS activists will also distribute sarees to women and donate food to the needy across the State.