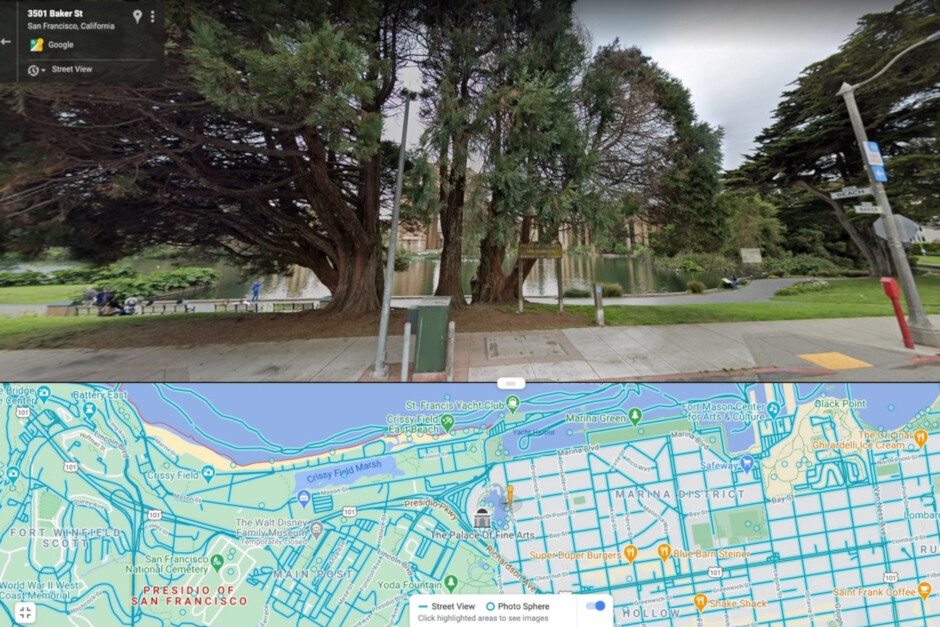 A server-side update disseminated by Google for the Android version of the Google Maps app is bringing to users a new split-screen UI to Street View. The split-screen mode surfaces when Street View is opened after a pin is dropped on the map. However, if you open Street View directly from a location’s listing, the UI you see will be the regular full-screen one with a minimize button in the lower right-corner.
With the split-screen, paths that have a Street View image are highlighted in blue. Photo Spheres, 360-degree photos snapped by users, are seen on the split screen as dots. Tapping anywhere on the split-screen will take you to that location on the map’s photo image, and the circular marker that shows where you are on the map includes an arrow; the latter reveals the direction being pointed at. Users might find it easier navigating Street View using the split-screen mode instead of using the arrows on the screen and dragging yourself around. At left, the regular full-screen UI. At right, the new split-screen view

Since we’re talking about a server-side update, whether you will receive it now on your Android handset is all a matter of random luck. And it is important to point out that this new UI can only be found on the Android version of Google Maps. So far, there is no word as to when iOS users will get the new split-screen UI for use on iPhone, iPod touch and iPad devices.