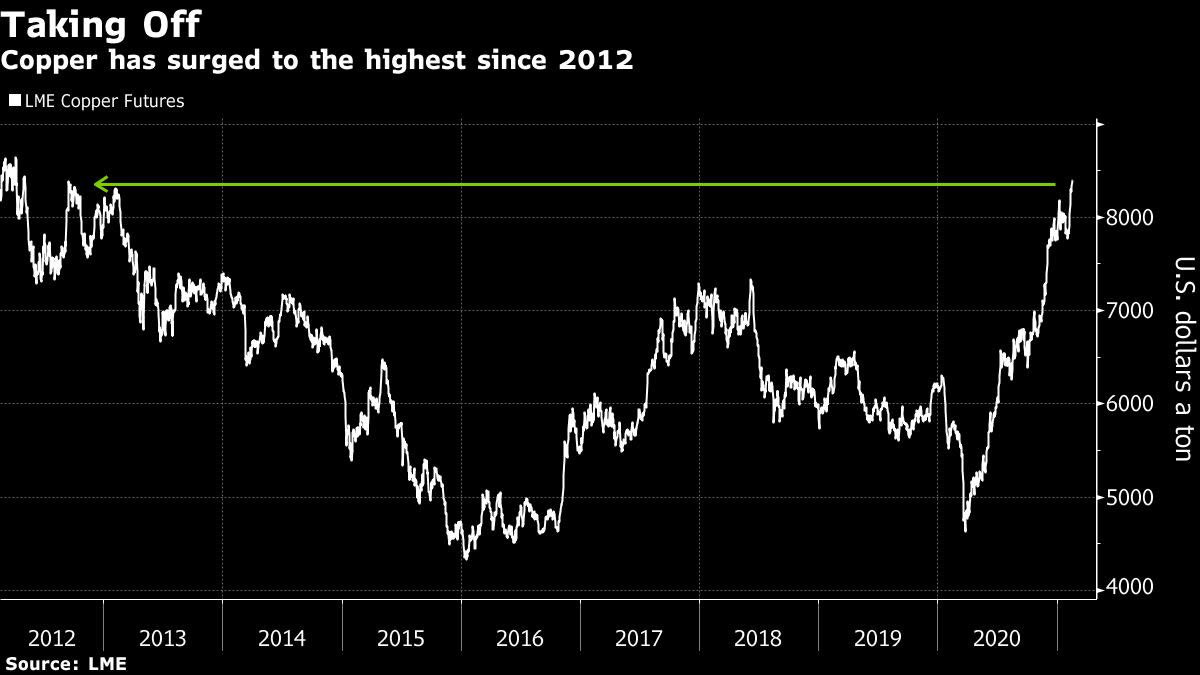 (Bloomberg) — Glencore Plc reinstated its dividend on the back of record trading profits as the world’s biggest commodity trader reports its final results under the leadership of billionaire Chief Executive Officer Ivan Glasenberg.

Glencore benefited from profitable bets on volatile oil swings in the first half of the year, and metals earnings jumped after prices soared following a plunge earlier in 2020. It’s also seeing a turnaround at the long-troubled African copper business. The company has brought its debt back down to within a target range and said it’s planning for further improvements this year.

Click here for a live blog on the Glencore earnings report

Glasenberg, who’s held the top job for almost two decades, will in the coming months hand over to Gary Nagle, a fellow South African who currently runs the coal business. After restoring the dividend, which was withdrawn last year to protect against potential shocks from the coronavirus pandemic, Glasenberg leaves the company well-positioned to benefit from metal prices that are trading at a multiyear highs.

At current prices, it looks likely the company could “top up” shareholder returns later in the year, Chief Financial Officer Steve Kalmin told reporters on a call.

“Glencore has been transforming the global commodities industry for nearly half a century, growing from a trader of ferrous and non-ferrous metals, minerals and crude oil, into one of the world’s largest natural resource companies,” Glasenberg said in the earnings report. “Today, the business and its portfolio of commodities is uniquely positioned for the needs of the future.”

It’s is the first of the major miners to report full-year earnings — BHP Group just reported bumper profits for its half-year — in what is expected to be a strong earnings season for the sector. The industry proved to be largely resilient to the impacts of the pandemic and benefited from a surge in commodity prices in the second half of the year.

Glencore will pay a $1.6 billion dividend and said it could increase returns later this year should commodity prices hold up. The company reported $3.3 billion in earnings before interest and tax at its trading business, almost evenly split between oil and metals.

But while investors will welcome the return of the dividend, it’s dwarfed by the returns offered by bigger rivals like BHP that mine iron ore — a notable gap in Glencore’s own portfolio.

Glencore still reported a full-year net loss of $1.9 billion after recording big writedowns for a second year. These included on the Prodeco coal mine that it’s handing back to the Colombian government and its Mopani copper business, which the company agreed to sell to the Zambian government.

Nagle, who will move to Switzerland from Australia next month, will also face longer-term challenges, including multiple corruption probes into the company, and decisions about the future of Glencore’s thermal-coal business. Glencore is the world’s biggest shipper of the fuel, while most of its rivals are in the process of exiting the industry amid investor pressure.

At the end of last year, the company outlined plans to become carbon neutral by 2050, a target that includes so-called scope 3 emissions, becoming the only major miner to do so. The company said Tuesday it will put that policy to its shareholders to vote on at its annual meeting this year.

Coal was also a notable laggard in the 2020 earnings statement, offsetting some of the stronger profits in trading and industrial metals, after prices weakened and it cut production.