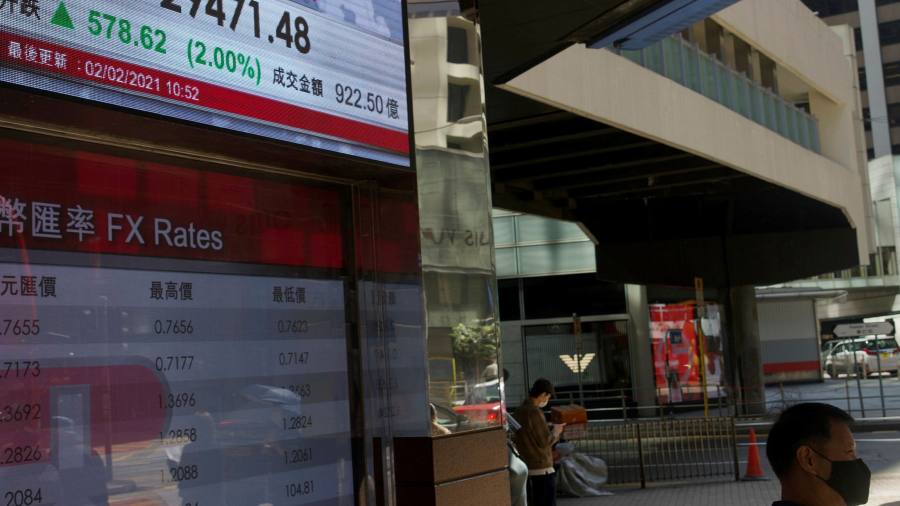 ‘Froth’ concerns linger but stocks hold on to gains

Stock markets continued to edge higher on Tuesday, as investors drew lasting confidence from the prospect of economic normalisation and the rollout of Covid-19 vaccines.

In Asia, mainland Chinese markets are shut for a public holiday, but Hong Kong’s Hang Seng added 1.9 per cent and Japan’s Nikkei 225 average gained 1.3 per cent. In Europe, the UK’s FTSE 100 rose as much as 0.7 per cent before paring back gains to slip 0.1 per cent in the late-morning session. US markets were closed for a public holiday on Monday, but futures suggest the benchmark S&P 500 index will open 0.5 per cent higher.

UBS Global Wealth Management noted that Asian stocks have gained faster than their US counterparts so far this year, but it still expected a further 10 per cent rise this year.

“Investors may be understandably concerned that Asian equities are getting frothy,” wrote the wealth manager’s chief investment officer Mark Haefele. “But it’s important to remember that we are only at the early stages of the economic recovery. Macro momentum in Asia is strong, and conditions are supportive of robust profits across sectors and regions this year.”

The FTSE 100 also stands out with a 5.7 per cent gain this month. “The UK market has never ever been so cheap,” said Didier Rabattu, head of equities at Lombard Odier Investment Management. He highlighted a move by investors into “value stocks” — those judged to be inexpensive relative to their earnings or assets — in the banking, energy and mining sectors.

Oil prices held steady at near 13-month highs. International benchmark Brent was flat at $63.12 a barrel while US marker West Texas Intermediate climbed 0.7 per cent to $59.86 a barrel.

Elsewhere in Europe, Mario Draghi, former president of the European Central Bank, was sworn in as Italy’s prime minister. The country’s government bonds weakened slightly on Tuesday, but are holding on to the bulk of their gains since Draghi’s shift into politics was announced.

“Our baseline scenario is that Italian government bonds can rally further on the back of lower political uncertainty and buying flows from foreign investors,” said analysts at UniCredit.

“There’s much less risk in Italy,” said Fahad Kamal, chief investment officer at Kleinwort Hambros, Société Générale’s private banking and wealth management division. “But, if you look at Italy in the postwar period, very few governments last longer than a year and ultimately Italy’s problems are deep and structural,” he added.