From A Teacher To Kerala’s Second Woman Health Minister 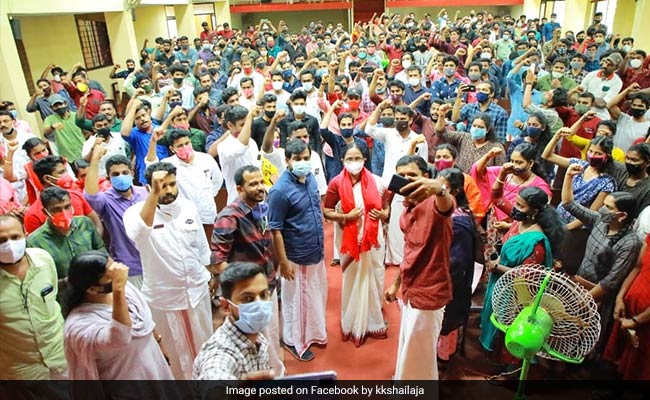 KK Shailaja is contesting for the fourth time and has lost one state election.

KK Shailaja, Kerala’s Health Minister, starts her day by meeting visitors at her home in Kannur’s Mattannur, now her constituency for the April 6 election. Mattannur is a CPI(M) stronghold where state minister EP Jayrajan won with a margin of around 40,000 votes in the last election.

A quick change of sari, a smile and KK Shailaja, 65, is ready for her day’s campaign.

At various meeting stops, KK Shailaja speaks of the Left government’s efforts to contain the Covid pandemic. “At a time even the most developed countries were helpless with increasing deaths, Kerala has a death rate of 0.4 per cent. This is our biggest achievement. In other states, you’ve had people go without food for days. In Kerala, government gave every card-holder free ration,” she says.

“This is a CPM bastion. I don’t support this party. I support the United Democratic Front (UDF), but Shailaja will win here. She is a good candidate,” says Hashim. At his shop, exclusively selling masks, election season is on display. Masks with CPI(M), Congress and BJP symbols are a big draw. “Masks with the CPM logo are most in demand here. This is my business, so I am happy about the sales,” Hashim grins.

He is yet to get any masks depicting RSP, an ally of the Congress-led UDF, fielded from here in a surprise move. On the campaign trail, KK Shailaja is juggling her constituency meetings with her ministerial responsibilities.

KK Shailaja is contesting for the fourth time and has lost one state election. As a health minister, she led Kerala’s efforts against the outbreak of Nipah and the Covid pandemic.

She grew up in Mattannur, where she completed school and graduation. KK shailaja was active in Left politics from school. She also met her future husband, K Bhaskaran, during their college time Left activism.

Ms Shailaja went on to teach in a school, and till today, is often known by the nickname “Teacher”

Her husband, currently the Mattannur CPI(M) Area Committee Member, also retired as a teacher more than a decade ago. The couple have two sons in their 30s.

On the campaign trail, Ms Shailaja is juggling her constituency meetings with her ministerial responsibilities. “It is very tiring. After the day’s campaigning I am exhausted. But the official work has to go on. I make sure I speak to my health secretary in the evening and I take calls from my officials – anytime. If they are calling, it could be a good news or a bad news, anything…” she says.

She is known as a hands-on minister who likes to dive into issues and work in a team with a calm demeanor. She seems to have won over her own following, regardless of political affiliation. 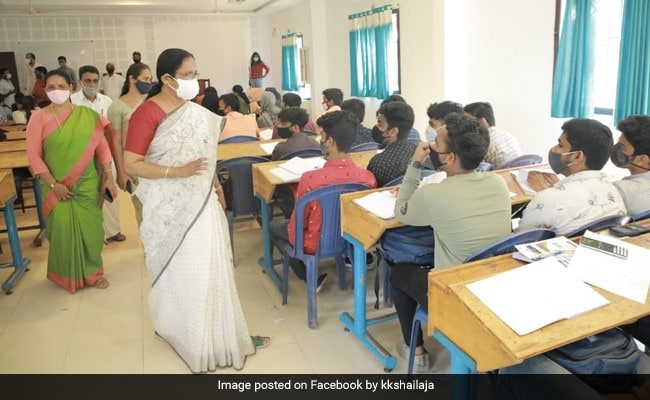 KK Shailaja is often known by the nickname “Teacher”

“I am a retired a navy officer. I don’t support any particular party. But I like KK Shailaja. She is an able minister. She should be back as health minister. Someday, may be as Chief Minister too,” said a retired officer.

“Just watch. The margin of win is going to be around 60,000 for Shailaja. People in Kerala have seen what a government can do,” says a shop owner.

It’s in this constituency that CP Mohammad managed to set up a shop four months ago. The 56-year-old named it “Shuhaib” after his 22-year-old son, a youth Congress worker, who was murdered around three years ago. Among those arrested were CPI(M) workers and supporters.

“I still don’t know why my son was murdered. He was our only breadwinner. I have three daughters. His mother and I have not been able to have one hearty laugh in the last three years. No CPI(M) leader has even met us or offered us words of assurance,” Mohammad says.

The UDF has fielded an RSP candidate, Illikkal Augusthy, from this constituency. The candidate says he has Mohammad’s support. “This is one of our campaign points, that there must not be political murders,” says Illikkal Augusthy.

“We don’t have a base or strong cadre in Mattannur when compared to the Muslim League or Congress. But we will work together.”

Ms Shailaja, in response to Augusthy’s challenge on political murders, says: “We all want peace. No one should die. From any party. No one deserves this. Only peace can ensure that we can work progressively together.”

Is your third stimulus payment in the mail? Track your check with this USPS service